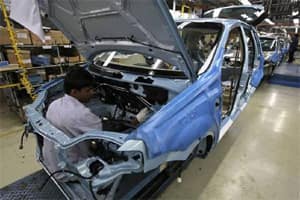 A depreciating rupee, competitive wages and technology upgrades by local manufacturers could see India’s auto components exports to China pick up meaningfully in the next few years. While exports rose 49% in FY14 to $314 million, this came off a very low base; exports had contracted 9% in FY13. But imports from China have been coming off, rising just 4% in FY14.

While total exports of auto parts from India trebled from $3.5 billion in FY07 to $10 billion in FY14 with global OEMs looking to source more parts from India, China has been a relatively small buyer. However, that is changing with auto firms like Great Wall Motors and FAW now buying parts like pistons and catalytic converters from India.

“This is due to a strengthening renminbi and a depreciating rupee, and the rising cost of manufacturing in China due to higher wage inflation than in India,” Sikka said, adding that Indian suppliers have controlled their costs and made quality improvements in their supplies over the last few years.

Abhimanyu Saraf, director at the R2,000-crore Vikas Group, which has nine auto component subsidiaries, told FE that India’s edge is in forgings and products that are dependent on local design inputs. “We export engine parts like catalytic converters and connecting rods to China, and the export value has already grown to R20 crore this year from R5 crore last year. Next year we are targeting R50 crore,” he said.

Added Sunil Arora, MD at Abilities India Pistons & Rings, “We started exporting to global players in China about six to seven years back when they noticed that though the prices were lower from local vendors, the quality was inconsistent. We are growing 10-15% now with R10 crore worth of exports to China out of a total of R35 crore.”

India’s auto components industry had been making strong inroads into the European and US markets for some years now, but several new factors have now helped the industry make a strong break into China. Between January 2012 and today, the renminbi has strengthened versus the dollar by almost 3%, while the cost of power in both countries is now largely the same — even though India still has problems of irregular supply.

“The labour cost in China is three times more expensive, and even though they are twice as productive, the balance is still in favour of India. Also, India’s disadvantage in terms of higher steel prices is now reduced. With China unable to subsidise coking coal (an input required to convert iron into steel), India’s steel is just 15% more expensive than 24% two years back,” said Vinnie Mehta, director general of the Automotive Component Manufacturers Association of India (ACMA). To improve Chinese market penetration, ACMA is taking a delegation of Indian suppliers to China next month for interactions with the local industry.

Timothy P Hanley, global leader for manufacturing at Deloitte Touche Tohmatsu, told FE that the time is just right for India, with many multinationals and private equity firms paying attention to the strong competitiveness of local players. “In China, the wages have doubled in the last five years. This has great potential for India with a labour force that will remain the youngest for the next few decades. The administration needs to deliver now,” he said.