Growth so far on back of discounts, dealer despatches 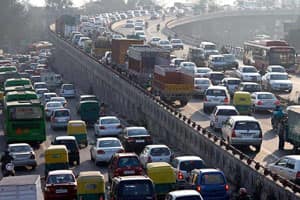 Maruti’s sales performance has a significant impact on the industry sales, as it holds almost 46% of the market share.(Reuters)

That much of the double-digit growth in sales of cars for the last three months was on the back of heavy discounts and pushing more number of vehicles to the dealers was most visible on Friday when the auto industry body released figures that showed car sales during January slipped into negative terrain (-0.72%) on a year-on-year basis. The slippage into the negative zone comes after 14 months of growth. Passenger cars make over two-thirds of the total passenger vehicle market. Passenger vehicle (which includes utility vehicles) sales, accordingly, remained flat at 0.6% in January.

Though car sales were never uniform across players and categories of cars even during the months of high growth as they were being driven by discounts and couple of new launches, the reason for the decline in January is chiefly twofold: Reduction of discounts and correction in inventory management. Most manufacturers had pushed wholesale despatches to dealers in the the last few months, leading to large inventories with the latter, leaving them with no room to take further stock. Second, most manufacturers pushed sales during December with year-end discounts, following by price hikes in January.

Just to illustrate the gap between the wholesale despatches by manufacturers to the dealers and retail sales at the end of the latter, while the industry growth on the basis of despatches between April and December was at 9.05%, the retail growth during the same period stood at 5.5%.

In fact, Maruti Suzuki’s executive director (marketing & sales) RS Kalsi had sounded a note of caution last month when he said that to conclude on the basis of the last few months of growth that the auto sector was out of the woods would be wrong.

The industry is in a wait-and-watch mode during the current month with regard to sales. With Budget announcement at the end of month, sales prospects hinge on the buzz around changes in the excise duty on cars. If there’s some expectation of a cut, sales get impact as buyers postpone purchase decisions and vice versa. However, since there’s not much of a buzz either way this time round, players are keeping their finger crossed.

“Growth declined as people advanced their buying to December due to record discounts offered by the companies. Also, there was correction in inventory levels during January by the companies,” Society of Indian Automobile Manufacturers director general Vishnu Mathur said, adding that the January sales could be a “temporary blip”. “We don’t expect it to be a long-term phenomenon,” he said.

“Factors like poor demand from rural markets and the restrictions on diesel vehicles in the national capital have had some impact on the sales. There has been a profound shift in customer preference towards petrol vehicles. From the point that I see the industry, the passenger vehicle sales should grow at 6-7% in February,” Rakesh Srivastava, senior vice-president (sales & marketing) at Hyundai Motor India, said.

The April-January industry growth stood at 8.13% against 3.62% in the last fiscal and SIAM expects to close the year in the range of 6-8%. On the outlook for the next fiscal, Mathur said, “We expect the overall passenger vehicle sales to grow in the range of 8-12%.”

The sharp decline in domestic sales in January disappointed market observers. Nomura, for instance, had pegged passenger vehicle growth to be around 13% during the month against 0.6% actually registered. Similarly, for Maruti, the estimate was at 15%, which turned out to be 0.78%. Maruti said that a lower number of working days in January had impacted its volumes as it rolls out around 5,000 cars every day. Maruti’s sales performance has a significant impact on the industry sales, as it holds almost 46% of the market share.