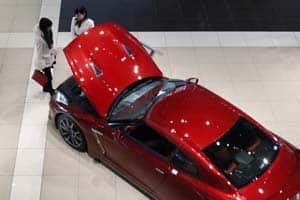 Back on its road to recovery after a prolonged downhill journey for most part of 2014, the Indian auto industry is looking ahead for a smoother ride in the new year while building upon an estimated USD 5-billion investments announced in the year passing-by.

Even as the year was drawing to a close, the sales figures remained disappointing with close to 10 per cent decline in the number of cars sold during the first eleven months of 2014 and festival seasons failing to bring any cheer.

It required a lot of efforts — both on the part of the companies and the government in form of duty sops — to kickstart the recovery from challenging conditions that the industry had to face this year.

The industry is hoping for continued support from the policymakers for a conducing business environment to grow further and address any fresh challenges in form of safety and environmental issues.

The year, which kicked off with the marquee industry event Auto Expo, also saw many new models hitting the market and helping sales counter ticking in a tough environment, which was worsened by the first-ever anti-trust order for the company when fair trade watchdog CCI imposed a fine of Rs 2,545 crore on 14 car makers.

Despite challenging conditions, various automakers including Maruti Suzuki, Mahindra & Mahindra, Bajaj Auto, Hero MotoCorp and Volkswagen announced investments in the country totalling Rs 20,500 crore over a period of time, which along with some other smaller investments are estimated to have taken the total tally to close to USD 5 billion.

“This year has been the year of turnaround. We have started witnessing growth after a long slowdown. We can say we have bottomed out and started to move towards recovery,” SIAM Director General Vishnu Mathur told PTI.

“By the end of the fiscal, we would see the growth coming back to the industry. We are looking forward to fundamental changes in the economy to support better sentiment which has evolved lately,” he added.

For the country’s car market leader Maruti, this was a year when it was forced to seek minority shareholders approval by investors over its plans to let parent Suzuki to own and invest at its proposed Gujarat plant.

Major car makers passed on the benefit to customers by reducing product prices and helped the auto industry post some good months in terms of sales, but the end of the year saw the prices again ticking up due to rising input costs.

After the Narendra Modi-led government came to power in May, it extended the excise duty cuts till December 31, giving the industry the much-needed fillip and the carmakers are now hoping for this support to continue in the new year.

In the beginning of the year, when the India’s flagship automobile show, Auto Expo kicked off in February, industry players were quietly optimistic that the sales slump would have to give way to growth.

The week-long show witnessed 70 product unravellings, of which 26 were global models. A total of 5.61 lakh people visited the show, with 90,000 attending on the last day. New launches at the show, including Maruti Suzuki’s hatchback Celerio and Hyundai’s compact sedan Xcent, brought the excitement back into the market.

On the other hand, the year also marked the end of the road for various popular brands including Hyundai’s Santro and Nissan’s sports utility vehicle X-Trail.

In terms of sales, 2014 saw fluctuating fortunes for the industry with stretches of decline followed by consecutive rise before falling in October again, failing to cash in on the festival period.

Besides sales decline, the industry also faced a number of challenges in the form of abundant vehicle recalls, and censure for safety issues.

Among the major recalls were Maruti’s over 1.7 lakh units of its popular models Ertiga, Swift, Ritz and DZire to replace faulty fuel filler neck and repair wiring harness fitments. It also called in 3,796 units of its newly launched mid-sized sedan Ciaz to fix suspected faulty clutch.

Honda had also recalled over 33,000 units of Amaze and Brio to replace a faulty part related to airbags and to inspect for a possible defect in the brake system.

Towards the end of the year Ford India recalled over 20,000 units of its compact SUV EcoSport to correct ‘concerns’ regarding airbags and fuel and vapour line corrosion.

The tests conducted by Global NCAP, an umbrella body of consumer car safety testing bodies, came back to haunt the Indian car makers as at the end of the year Maruti’s popular hatchback Swift and Nissan’s Datsun GO failed crash tests.

Going a step further, it even asked the Japanese car maker to withdraw its compact car Datsun GO from the Indian market saying it was “sub-standard”.

While Mahindra, announced an investment of Rs 4,000 crore over a 7-year period to expand its existing facility at Chakan in Maharashtra, Maruti Suzuki earmarked a sum of Rs 4,000 crore for FY 15 for new models and marketing.

Bajaj Auto also said it was pumping in Rs 2000 crore in Maharashtra in its existing facilities.

German auto major Volkswagen announced an investment of 100 million euros (around Rs 800 crore) in India to expand business, including launches of sedan and SUV in the compact segment along with a hatchback.

2014 also saw tragedy unfold as the then Tata Motors Managing Director Karl Slym passed away after falling from a hotel building in Bangkok where he had gone to attend a board meeting of the company’s Thailand arm.

In the two-wheeler segment, Mahindra & Mahindra announced plans to acquire 51 per cent stake in Peugeot Motocycles, part of the 54 billion euro PSA Group based in France.

On the other hand, country’s largest two-wheeler maker, Hero MotoCorp announced its plans to enter various global markets, including the US, Brazil and Europe earmarking a total investment of Rs 5,000 crore for capacity expansion at home and abroad.

By 2020, the company aims to be in over 50 countries with 20 plus assembly facilities globally. It is setting up two overseas manufacturing plants in Colombia and Bangladesh that are expected to go on stream in 2015-16.

It is also in the process of building two more manufacturing plants in India. When operational, all these plants – including the ones in Colombia and Bangladesh – will take the total installed capacity of the company to over 12 million units of two-wheelers.

Its competitor Honda Motorcycle and Scooter India also began work on its Rs 1,100 crore scooter plant in Gujarat. It is expected to be up and running by the end of 2015.