On turnaround: “Can’t help bring auto metaphor but this (economy) is a flywheel,” said Mahindra. 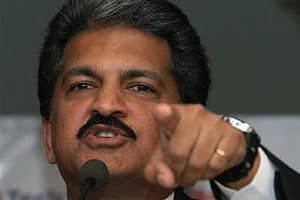 “India has now got to make the most of this opportunity. This is the time when inflation which is led by fuel, for example, is going on a downward trend…. I think I am going to repeat my refrain that it might be time for RBI to think about softening interest rates,” Mahindra said here on the sidelines of the India Economic Summit.

Defending the central bank under Raghuram Rajan for the steps it had taken in the past to keep inflation under control, he said: “I think the governor has done an amazing job so far. No one should take away the fact that we needed inflation Czar to come in, crack the whip, keep it under control, he did that very admirably. He sent out positive signals to the world about fiscal discipline….”

Mahindra, however, said the changed circumstances now warranted a different approach to take the economic growth to a higher trajectory.

When asked by when he expected India returning to double digit growth, he said: “Well I can’t help bring an automotive metaphor but this (Indian economy) is a flywheel, this is a large industry.

“It’s not jump start, this is a slow start because its a giant wheel…. I see signs that this flywheel is beginning to move.

“We should not expect miracles overnight but if we do all the right things and get support from continued deregulation, a little dose of reform everyday coupled with some interest rate reduction I think by the first quarter of next year you will see palpable signs of growth.”

The inflation measured in terms of Wholesale Price Index (WPI) touched a five year low of 2.38 per cent in September.

Besides, retail inflation has also dropped to 6.46 per cent, the lowest since the new series of Consumer Price Index was released in January 2012.

While appreciating the steps taken up by the new government such as extending the excise duty cut, he said it is time for it to bring down taxes in the auto industry.