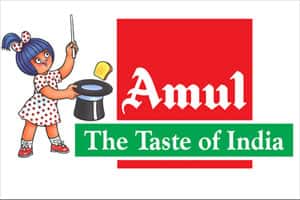 “In 2013-14 (April-March), GCMMF’s sales turnover was Rs 18,143.66 crore. Besides, our individual dairy unions (for instance, Surat, Vadodara and Rajkot) did sales of Rs 6,000 crore in their respective districts under the Amul brand without transacting through GCMMF. It, thus, added up to over Rs 24,000 crore,” he noted.

This year, GCMMF alone is likely to do Rs 22,000 crore and the unions on their own another Rs 8,000 crore. So, in all, the Amul brand will register a turnover of Rs 30,000 crore, Sodhi told The Indian Express here.

That could make GCMMF/Amul India’s largest FMCG player, ahead of HUL which recorded net sales of Rs 27,408.29 crore in 2013-14. Moreover, HUL sells a range of personal care, homecare, food and beverages products under 50-odd brands, whereas GCMMF / Amul’s business is confined to dairy under a single umbrella brand.

According to Sodhi, the one big change in the last five years has been GCMMF’s move to extend milk procurement operations beyond Gujarat.

“Till 2009-10, we were marketing our products across India and overseas, while sourcing all our milk from within Gujarat. This is no longer the case,” he said.

During this fiscal, overall average procurement is expected is to cross 150 LLPD, out of which 25 LLPD or one-sixth would be from outside Gujarat.

Simultaneously, the Amul unions have also been establishing dairy plants outside Gujarat. The combined milk processing capacity of these plants — both existing and proposed — is around 85 LLPD (see table).

According to Sodhi, the decision to expand both procurement and processing operations to other states was taken because sourcing from just Gujarat was restricting Amul’s growth.

“On the one hand, we were seeing the domestic market for milk and milk products growing by double-digits annually. This was happening on the back of rising incomes and consumers moving to branded dairy products — be it milk, curd or paneer. On the other hand, there were organised private sector dairies and multinationals wanting to cater to this demand. We had no choice, then, but to modify our procurement strategy,” he pointed out.