Airbus to enter into partnership with Canada’s Bombardier

Airbus will take a majority stake in Bombardier’s marquee C-Series airliner programme, the companies announced, as the Canadian firm battled against a stiff tariff ruling in the US. 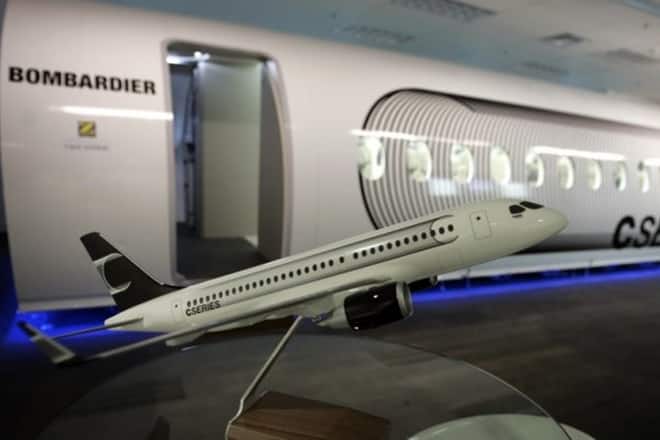 he agreement between Airbus and Bombardier aims to allow for significant production savings on the C-Series aircraft and to make use of Airbus's international reach for sales, the two groups said in a statement. (Reuters)

Airbus will take a majority stake in Bombardier’s marquee C-Series airliner programme, the companies announced, as the Canadian firm battled against a stiff tariff ruling in the US. The landmark agreement comes after the US administration slapped a 220 per cent countervailing duty, as well as an 80 percent anti-dumping tax, on Bombardier CS100 and CS300 aircraft imported into the US. Boeing accuses Bombardier of manufacturing its 100-150 seat planes with public subsidies and selling them at a loss to Delta Air Lines. The agreement between Airbus and Bombardier aims to allow for significant production savings on the C-Series aircraft and to make use of Airbus’s international reach for sales, the two groups said in a statement. “It’s a win-win deal for everyone,” said the president of Airbus, Tom Enders. “I have no doubt that our partnership with Bombardier will boost sales and the value of this program enormously.” The programme’s production headquarters will remain in Quebec. Airbus will take approximately 50.01 percent of the shares in CSALP, the entity which manages the C-Series program, with Bombardier and Investissement Quebec holding 31 and 19 per cent respectively. “We are very happy to welcome Airbus to the C-Series program,” Bombardier’s CEO Alain Bellemare said. “Airbus is the perfect partner for us, Quebec, and Canada,” he added.

A deal between the two companies had been mooted previously but discussions stalled two years ago and the project was abandoned. The C-Series is a state-of-the-art aircraft largely built from composite materials. It complements Airbus’ medium-range carrier, the A320, which can carry some 140 passengers. “The single aisle market is a key growth driver, representing 70 percent of the expected global future demand for aircraft,” according to a statement from Bombardier. “Ranging from 100 to 150 seats, the C Series is highly complementary to Airbus’ existing single aisle aircraft portfolio, which focuses on the higher end of the single-aisle business (150-240 seats).” The US aerospace firm Boeing, claiming its competitor received unfair state subsidies, successfully petitioned the Trump administration to impose financial penalties on Bombardier to keep it from selling its C-Series planes in the massive US market. In turn, Canada has voiced interest officially in some Australian military aircraft and called off discussions with Boeing on a possible purchase of 18 new Super Hornets. It intends to renew its fighter jets and is set to seek offers in 2019.

Bombardier’s C-Series is the first new design in the 100- to 150-seat category in more than 25 years, and US-based Delta Airlines has ordered 75 of them. In the complaint to the US Commerce Department that led to massive anti-dumping duties being imposed on Bombardier, Boeing accused its rival of unfairly benefiting from state subsidies that allowed it to sell C-Series aircraft at below cost to Delta Air Lines. During a conference call for the airline’s third quarter results, Delta chief executive Ed Bastian said the duties imposed on the C-Series were “nonsensical,” and vowed not to pay the additional tariffs.

The trade row escalated to include rebukes from Canadian Prime Minister Justin Trudeau, who vowed to retaliate by nixing plans to buy 18 Super Hornet fighter jets from Boeing, and Britain’s Prime Minister Theresa May, who is worried for 4,200 C-Series wing assembly jobs in Northern Ireland. Bombardier, meanwhile, has noted that the C-Series rollout would generate more than USD30 billion for US suppliers and support 22,700 American jobs.

Follow us on
Latest News
Quona Cap closes new fund at $332 million
Prolonged Exposure to Air Pollution can have severe effects on the Human Skin
Toppersnotes aims to gain foothold in tier 2 and 3 markets, eyes net revenue of Rs 20 crore
Want to “Know Your Customer” better? KYC-oriented blockchain can be the next big thing…
Birla Corporation’s MD resigns, company posts net loss of Rs 56.46 cr in Q2
Rural woes continue for FMCG companies
NSE to trim portfolio of companies
Photos
Lunar Eclipse 2022: Did you get a glimpse of Chandra Grahan? This is how the Moon appeared in different parts of the world
9 hours agoNovember 8, 2022
Happy Guru Nanak Jayanti! A festive look into the celebrations from across the nation
16 hours agoNovember 8, 2022
Dazzling & Astounding! Proposed design of the to-be redeveloped Dakaniya Talav Railway Station in Rajasthan-PHOTOS
4 days agoNovember 5, 2022
Read More
×
KKR to invest $400 million in Vedanta arm
Deposit rates may rise by 50-75 bps on loan demand
Vodafone goes downhill in 7 circles
Employees’ strike may hit services on November 19: Bank of Baroda
Rivaara Labs raises its first round of equity capital from Amicus, Kotak
PSBs’ operating profits get fee income boost in Q2FY23