Domestic budget carrier AirAsia India today announced the induction of seventh aircraft to its fleet with the introduction of Hyderabad to its network of destinations. 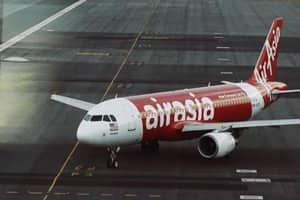 The ban is effective from mid-night Sunday, AirAsia said. (Reuters)

Domestic budget carrier AirAsia India today announced the induction of seventh aircraft to its fleet with the introduction of Hyderabad to its network of destinations.

AirAsia India’s seventh A320, 180-seater one class aircraft, will be operational from September 22, and connect Hyderabad with Bengaluru and Goa on a daily basis, the company officials said.

The AirAsia flight will also connect Bengaluru to Guwahati with a daily service, they said.

“This lucky seven aircraft is the beginning of our journey to get to 20 aircraft as soon as possible over the course of next multiple months. This aircraft will operate on our new routes from September 22, 2016,” AirAsia India CEO Amar Abrol told reporters here.

“….AirAsia India’s entire team is working towards realising 20 aircraft as soon as possible, but these things take a bit of time. We have to get the aircraft, we have to get the pilots, it’s all work in progress,” he added.

AirAsia India that started its operations on June 12 2014 said with the addition of one more sector it will be now flying to 11 destinations with its hubs in Bengaluru and New Delhi covering Chandigarh, Jaipur, Guwahati, Imphal, Goa, Pune, Vizag, Kochi and Hyderabad in its network of destinations.

Stating that AirAsia India’s market share now is 2.2 per cent, Abrol said, “it is constantly growing, we have just crossed three million passengers, year on year growth in number passengers flown on us is about 54 per cent , we have an amazing load factor- we clocked about 86 per cent on average…”

He said “we are very very India focused, we will certainly continue to invest and grow our network in India…We are investing in aircraft, my board has cleared the funding, it’s a matter of time when we get to 20 (aircraft).”

Not wishing to comment on the funding that has been cleared by the board, Abrol said it is a “significant millions of dollar investment that’s has been approved.”

Noting that the airline is working on a network plan, he said “largely over the period of time we are connecting more and more to Goa which is the party capital of India. We are certainly growing our network where BPOs, KPOs, the youth are, and connecting the dots.”