A year into Vishal Sikka reboot, Infosys appears to have turned the corner 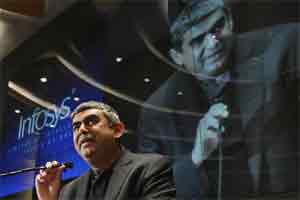 Vishal Sikka said that in its various service lines they could massively migrate mechanizable work to automation, and instead build intelligent software systems. (Reuters)

A year ago, Infosys chairman emeritus NR Narayana Murthy, while introducing the company’s first non-promoter CEO Vishal Sikka, recalled a conversation where he was curious to know the meaning of the word ‘Sikka’. He was told it essentially meant ‘money’.

Exactly a year later, the IT major saw its scrip zoom 11% on July 21, the day it announced the quarterly results, and Murthy may well have been reminded of that query. The April-June period saw Infosys recording its best revenue growth in 15 quarters and finest volume growth in 19 quarters.

The first year of Vishal Sikka as CEO was marked by a relentless drive to the set right the course of the country’s second largest IT services exporter. The challenge was to alter the existing business model to a company that will be future-ready.

When Sikka formally took over as Infosys CEO in August 2014, there was considerable instability with senior management exits, high employee attrition and an uneasy investor community tugging at its heels. In short, there was a crisis of confidence as the IT major was transitioning from a founder-driven organisation.

Talking to FE, V Balakrishnan, former Infosys board member and chief finance officer (CFO) said: “The last one year has been very challenging for Infosys as it has seen a huge transformation. Sikka was the first CEO to be hired from outside the organisation.”

He added that a key achievement of Sikka has been his ability to inspire confidence with all stakeholders – employees, customers and investors — and steering the company in the right direction. Sikka had set the ball rolling by driving home the point that technologies like automation, robotics and artificial intelligence will be key drivers of change, not to forget design thinking.

This led to the ‘renew and new’ strategy where it would focus on re-engineering the existing business while also devoting resources for new kinds of future businesses, which would mean products, platforms and solutions. Peter Bendor-Samuel, CEO, Everest Group, an outsourcing consulting and research firm, said: “What Vishal has brought to the table is focus, urgency and a relentless drive to turn Infosys into a customer-centric organisation.”

In addition to overhauling the sales engine of Infosys, Sikka has brought changes to its delivery structure. According to Bendor-Samuel, the CEO defragmented delivery teams and appointed strong managers who challenged the conservative Infosys culture.

In the current scenario, businesses of IT services companies are increasingly turning commoditised with severe pricing pressure. The model of hiring people to deliver a service is unlikely to be sustainable in the near future.

Said Sid Pai, a senior IT analyst: “Sikka seems to be trying to set the company on a course to handle the future of IT service delivery, where clients will increasingly look to have entire business processes delivered to them on a turnkey basis with no investment in computing machinery, software and people.”

At the same time, Sikka will also have to manage the aspirations as a publicly listed company. After a not-so-encouraging FY15 with a growth rate of 5.6%, it turned the corner with very positive revenue numbers for the first quarter of FY16. Brokerage house CLSA in its note following the first quarter results said, “A strong rebound in revenue growth after the poor end in FY15 indicates that the firm was distracted by the reorganisation in Q4FY15 that led to an exaggerated impact on performance. An outstanding beginning indicates that new management is investing in the right areas and has been able to get to the pulse of employees and clients.”

After the first quarter results, Sikka said he was still in the early stages of  the journey towards directing the company into a next generation services company. “However, this quarter gives us something to smile about and good reason to be confident,” he said.

The new business model will have greater dependance on automation with lesser reliance on people. “This shift will not be easy for Infosys – or indeed any player whose core business is dependent largely on its people. This will mean significant retrenching of staff and a reduction in the hiring profile of such companies in future, said Sid Pai.

According to Bendor-Samuel, the bet that Vishal is making is that he can drive Infosys to adopt these next technologies and business models faster than the rest of the industry. This is unlikely to be easy as the competitors are also treading the same path.