A Feast of Vultures: The Hidden Business of Democracy in India; Book Review

For all assumptions of the next century belonging to India, here comes a dampner 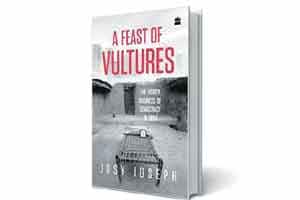 This is also a book that should be read by analysts who see the world through the prism of the business-economy lens—of stock market, emerging market, rural market, India vs China growth story.

THIS IS a book that will depress you. It won’t be an overstatement to say that it is a pessimistic take on today’s India, but at the same time, it is a must-read for every Indian. The book paints a realistic picture of the country, which, sadly, never gets depicted in the works of our academicians or even journalists.

This is also a book that should be read by analysts who see the world through the prism of the business-economy lens—of stock market, emerging market, rural market, India vs China growth story. This is a book for everyone who is interested in the story of post-independent India told in the most blunt manner.

In post-1991 India, as we liberalised and the culture of imported consumer goods evaporated, we started thinking that India has arrived. The glitz of urban centres with flashy neon lights, mushrooming malls, cars of all varieties, cheap air travel replacing train journeys, etc, threw in a narrative that India has arrived. We were caged by the socialistic policies of the past and as soon as we liberalised, the country changed, so much so that the next century belongs to us is the common assumption.

There’s some truth to such assumptions. India and Indians certainly have changed. But in what ways is best captured in this book. In fact, I suggest that such books should be recommended in colleges so that students are able to have a picture of the real India, rather than the imagined one picked up in textbooks. But am sure, this will never happen, because there are issues on which all political parties unite and opposition to such books will be one.

If the pre-1991 India had a politician-businessman-bureaucrat nexus, the post-liberalisation era is not very different; only the nature has changed. While in the socialist days, powerful businessmen grabbed all permits and licences to check any competitors from entering the market, in the current era, competitors are kept in check by putting in a clause in policies or tenders that may suit the favoured party. Even if that doesn’t work, bumping off the rival through underworld connections cannot be ruled out. In this context, the chapter, Battle for the Skies, is a must-read, for it narrates the story of the liberalisation of the airline sector and how two airlines fought for supremacy, which led to one of them being grounded eventually. The other one is the country’s largest private-sector airline today.

The book begins with a village, Hridaychak, in Bihar. It vividly depicts how basic amenities like a toilet, house or school elude the people of this village. A mere reading of their plight makes you feel: is this the country where you also live? It then goes on to capture the emergence of a kind of people whom everyone—from a powerless villager to a powerful political party— find useful: Mr Fix-it. This Mr Fix-it gets votes for the parties and basic amenities for the common people.

The rise and importance of political aides is best captured in a chapter on such people, with the stories of RK Dhawan, who started his career as a stenographer of Indira Gandhi, and Vincent George, who later took on Dhawan’s role, became secretary to Rajiv Gandhi and is currently the private secretary of Sonia Gandhi. The importance of such people and their rise teaches you that you may be an MBA from an Ivy League institution, but you cannot match either the skills or wealth of such luminaries.

The Arms and the Middlemen will make you sit up and think how we as a country survive today and also how generals or admirals become richer after retirement. Next time when your heart bleeds for soldiers, do read this chapter. Similarly, A House for Mr Ambani will tell you that when it comes to some people, everything is fair.

In short, in India what matters is connections and how well you are able to leverage them. The common people who have a vote do not really matter and can be managed.

In a book of such expanse, it is obvious that there will be some excesses, some generalisations and some factual errors over which one can quibble. I, for one, spotted errors relating to the telecom sector and the related Comptroller and Auditor General’s report (no, not the Vinod Rai one of 2G; it’s the other one). But such excesses should not distract us from the larger theme and direction of the book, which remain on course.

Josy Joseph has written in a racy, gripping style and the book reads like a mystery novel. Sadly, it is not fiction, but reality.