400 per cent rise in bookings: Spicejet 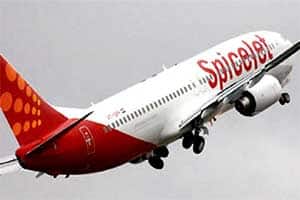 Budget carrier SpiceJet today said that it has registered a massive 400 per cent spike in its bookings on the first day of its Super Sale scheme, which offers fares as low as Rs 1,499 for a one-way journey on its domestic network.

Naresh Goyal-promoted Jet Airways also slashed fares a second time in a week to match with its rivals.

“400% increase in bookings on Day 1 of our first Super Sale of 2015! Win-win-win for customers, airlines, and travel ecosystem,” Kapoor tweeted.

The airline, which had announced a series of flash sale offers last year notwithstanding criticism from the peer group and also the regulator, put on sale yesterday half a million seats for a travel period between February 15 to June 30.

Spicejet, after being in a financial distress for over a year, is currently in the process of change in the management control and ownership. Its promoter Kalanithi Maran had early this month announced that he would transfer his stake in the carrier to original founder Ajay Singh as part of the revival plan. The plan has has already received the Civil Aviation Ministry’s approval and is now with the market regulator Sebi.

As part of the plan, SpiceJet will get Rs 1,500 crore in new equity funding in a staggered manner by April 30.

“As we continue on our re-structuring path, the return of our Super Sale in 2015 at the onset of low season is a continued vote of confidence in the fact that such sales and promotions, if done right, are a win-win-win for customers, airlines, and the travel ecosystem at large,” Kapoor had said yesterday.

Jet Airways, which had only last week offered up to 25 per cent discount on economy class fares for its domestic flights, today rolled a 30-day advanced purchase scheme, offering return fares starting as as low as Rs 4,459 for select sectors.

The Jet Airways offer is valid for return journey in economy class for travel up to March 31.

However, the tickets under the offer have to be booked a minimum of 30 days prior departure.

March and September quarters of the fiscal are traditionally lean seasons for the airlines in the country, and they woo customers with low fares to fill up the empty seats.

“We are glad to witness an overwhelming response for our first signature promotion for 2015. Our aim has always been to incentivise customers to reward early planners with great discounted fares,” said SpiceJet Chief Commercial Officer Kaneswaran Avili.