3 crore LED bulbs to be distributed in Madhya Pradesh in 6 months: Piyush Goyal 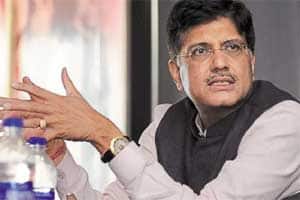 Goyal said that wind power developers have themselves requested that the bidding route be adopted for the sector.

As many as three crore LED bulbs will be distributed over the next six months under the UJALA scheme in Madhya Pradesh that will kick-start the energy revolution in the state, Power and Coal Minister Piyush Goyal said today.

The Centre’s LED programme, Unnat Jyoti by Affordable LEDs for All (UJALA), was launched today in Madhya Pradesh by Chief Minister Shivraj Singh Chouhan and Goyal at a function held in Bhopal, Power Ministry said in a statement.

People of Madhya Pradesh will get 9 W LED bulbs at an upfront payment of just Rs 85 per bulb, Goyal said.

The scheme is being implemented by Energy Efficiency Services Limited (EESL), a joint venture of several PSUs under the Union Power Ministry.

Goyal further said within one year, nine crore bulbs have been distributed under UJALA Scheme, which helped consumers across the country to save Rs 5,500 crore.

Consumers can buy LEDs by presenting any identity card. These bulbs come with a three-year free replacement warranty in case of any technical defects.

The luminosity of 9W LED bulbs to be distributed in MP is of 900 lumens, which is highest in the country.

Each 9 W LED bulb gives the same luminosity as compared to a 100 W incandescent lamp, while consuming less than one tenth of power.

More Stories on
LED BulbsPiyush Goyal
Next Story
No bidder turns up at Kingfisher Airlines’ auction for brands, trademarks