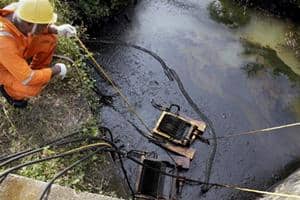 The National Green Tribunal on Tuesday imposed a fine of Rs. 100 crore and Rs. 5 crore on Qatar-based Delta Navigation and Adani Enterprises Ltd. respectively in 2011 Mumbai oil spill case. On 4th August 2011, a shipping carrier named M V Rak sank 20 nautical miles off the South Mumbai coast in the Arabian Sea. The ship carrying coal was owned by Delta Navigation whose parent company is Qatar-based Delta Group International. NGT directed the shipping enterprise to be made the main party in the case.

Adani Enterprises, to whom the coal was to be delivered for a thermal plant in Gujarat, was also made a party in the case. The ship was carrying around 290 tonnes of fuel oil, 50 tonnes of diesel on-board and 60,000 metric tonnes of coal for Adani Enterprises Ltd’s Gujarat thermal power plant.

The tribunal had also summoned Ministry of Environment and Forests (MoEF), Maharashtra government and Mumbai Maritime Board, on a plea which alleged that dumping of 60,000 metric tonnes of coal from the ship into the sea caused huge environmental damages. The Coast Guard IG, Mr SPS Basra, stated that the suspected cause was leak in the hull which allowed water into the ship’s holds. The 30-member ship crew was rescued by the Coast Guard.

After the ship sank on August 4, an evident oil slick was reported on August 6 which spread near the coast. A defence press release issued a day after said that oil had spread about 7 nautical miles around the vessel. The captain and the chief engineer of ship were immediately arrested by local police officials on the charges of “endangering life or personal safety of others.”