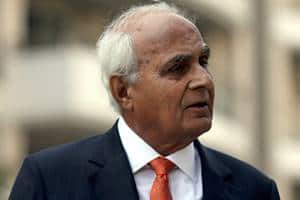 Kushal Pal Singh, promoter of India’s largest real estate group DLF, acquired a company in British Virgin Islands, a tax haven, in which his wife Indira KP Singh is a co-shareholder, according to documents of Mossack Fonseca (MF), the Panamanian law firm that helps set up offshore entities.

Internal files of MF, accessed by The Indian Express, show that the real estate baron has been described as a “politically exposed person (PEP)” by Mossack Fonseca & Co (BVI) Ltd, the registered agent for Singh’s offshore entity called Willder Ltd. Singh has been the Honorary Consul General of Monaco in Delhi since October 1990, and credited by GE’s former chairman and CEO Jack Welch for having initiated the global corporation’s India entry. Last year, DLF made headlines over a controversial land deal with Robert Vadra, the son-in-law of Congress president Sonia Gandhi.

While K P Singh, now 84, and his wife Indira became shareholders in Willder Ltd in 2013, MF records reveal that at least two other companies were set up by their family members in 2012, one each by son Rajiv Singh and daughter Pia Singh with their immediate family as shareholders.

Most offshore entities are very thinly capitalised — or, at times, the shares do not have any par value. But the Singh family’s three offshore entities — with MF as the registered agent — together hold almost Rs 67 crore or $10 million in shares, records show. Singh was ranked 130 in Forbes’ list of the world’s richest with $7.3 billion in 2011.

While each share had a par value of $10,000, the company decided to set aside $6,400 from KP Singh’s contribution and $4,400 from Indira Singh’s towards share application money. Singh and Indira Singh were allotted 67 and 71 shares, respectively.

Subsequently, they were allotted 51 shares and 53 shares, respectively, in three tranches between August 2013 and March 2014. At the end of February 2014, Singh had 118 shares and Indira Singh 124 shares. At $10,000 a share, the contribution to capital by Singh and Indira Singh, excluding share application money, would add up to $1.18 million and $1.24 million, respectively — Rs 7.9 crore and Rs 8.3 crore, respectively. This puts Willder’s capital at over Rs 16 crore.

Rajiv Singh and Pia Singh, too, set up offshore entities with their own family members as shareholders. Alfa Investments Global Ltd is an offshore company registered in British Virgin Islands with Pia Singh, her husband, Dhiraj “Timmy” Sarna, and their children Jai Sarna and Tara Singh Sarna as shareholders. Pia Singh, till May 2015, was a whole-time director in the flagship company DLF, but is now only a non-executive director. Timmy Sarna, who also belongs to a business family with interests in real estate, is the managing director of DLF Brands Ltd, a DLF Group company.

The records show that even as MF moved to register Alfa Investments Global Ltd in BVI, its compliance department undertook a search to establish that Pia was indeed the daughter of KP Singh. Given the number of shares Pia and Dhiraj hold with those assigned to their children Jai and Tara, the total capital of Alfa Investments Global Ltd in February end 2014 adds up to $ 3,756,400 or $3.75 million – Rs 25 crore.

Rajiv Singh, who is vice chairman of the DLF Group, is a shareholder along with his wife Kavita and two daughters Anushka and Savitri Devi in another BVI company Beckon Investments Group Ltd. Incidentally, Savitri is married to former Union Cabinet Minister Ghulam Nabi Azad’s son.

All the three BVI companies, Willder Ltd, Alfa Investments Global Ltd and Beckon Investments Group Ltd are listed as “enterprises under the control of the key management personnel and their relatives” in the 2013-14 annual report of DLF Ltd.

These three companies are among the 127 companies listed under this category in the DLF annual report. While undertaking due diligence of Beckon Investments Group Ltd shareholders, MF’s compliance department noted that Anushka, Savitri Devi and Kavita are shareholders in four BVI companies.

The MF Compliance Department states that Singh is not involved in any illegal activity, but refers to news reports on October 14, 2014, and another on April 6, 2010, which said that in March 2010, a group of property buyers have lodged a first information report (FIR) against the chairman of the board of DLF Limited, K P Singh for allegedly having reneged its commitment to refund about Rs 300 crore for a delayed project.

It also cites an instance when SEBI barred DLF Ltd and its top officials, including K P Singh, from accessing the capital market for three years for non-disclosure of legal cases during the company’s initial public offering (IPO) in 2007.

RESPONSE: K P Singh, responding on behalf of the family, said: “It is submitted that the permissible modus operandi of RBI for remittance of money under permissible LRS limit each year allows a Resident Indian to firstly open a bank account in a foreign bank and thereafter remit the funds in it. The remittances commenced in 2004 after RBI announced the LRS, the quantum of remittances were within the prescribed limits, and undertaken through the Authorised Dealer.

“It is evident from the conduct of our foreign LRS bank accounts that the accumulated money was lying in the accounts for many years without being invested anywhere. The actual fact is that the subscription towards the shares of an existing foreign company were made from the accumulated bank balance existing in out foreign bank account (LRS Accounts).

“The actual remittance/s from India never exceeded the permissible LRS limit. The investments made by us related to subscription of shares of an existing foreign corporate entity which was not set up by us. Instead, this foreign corporate entity was set up by foreign nationals. No such action had ever been taken by us for setting up/ incorporation of a foreign corporate body. All throughout and ever since 2004, acquiring shares (listed or unlisted) has been permitted through various Master Circulars issued by the RBI from time to time. Therefore, question of compounding/ wind up/ divest does not arise.

“Since shares were acquired under LRS, there is no reporting requirement for the entity under FEMA. The details are mentioned in Schedule of Foreign Assets of our Income Tax returns every year since it is required under the Income-Tax Act, 1961 and rules made thereunder.

“It may be clarified that the shares in the foreign entity have been subscribed by us through and out of the funds held by us in our foreign bank accounts. No funds were remitted directly from India to subscribe/ acquire any shares of any foreign company.

“It is further clarified that the shares in the existing foreign entity have been subscribed by us from the funds held in our LRS accounts abroad and not from the remittances from India. It is certainly not a violation of any RBI’s/ FEMA regulations. All remittances and utilisation of the funds are strictly in accordance with the rules and regulations of FEMA and Income-Tax Act.”

**An Investigation by The Indian Express with International Consortium of Investigative Journalists & Suddeutsche Zeitung, Munich. For all the stories from around the world go to ICIJ.ORG