Yogendra Yadav further said that after forming Swaraj Abhiyan he had decided not to criticize Aam Aadmi Party. 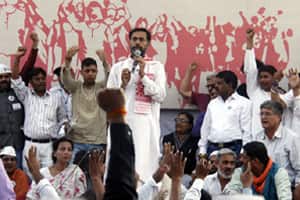 Yogendra Yadav on Arvind Kejriwal and Najeeb Jung tug war: 'In our opinion it is immature and counterproductive way of making a valid political point. The demand of full statehood to Delhi is a valid demand.' (Express photo)

Swaraj Abhiyan, a group formed by ousted AAP leaders Yogendra Yadav and Prashant Bhushan on Thursday came out in support of Delhi government’s demand of full statehood and tussle with Lt Governor Najeeb Jung over appointments of senior bureaucats.

But the group criticized the manner in which the demand was raised by the Arvind Kejriwal government, calling it “immature” and “counterproductive”.

“In our opinion it is immature and counterproductive way of making a valid political point. The demand of full statehood to Delhi is a valid demand.

“But the manner in which it is being made it can prove counterproductive for demand of autonomy of Delhi. It is being feared that this agenda may be now pushed for 10 years or so,” Yogendra Yadav said suggesting to keep NDMC and Delhi Cantt areas under central government control.

Yadav further said that after forming Swaraj Abhiyan he had decided not to criticize AAP.

“In last month we could have got enough television space by giving some comments but we kept ourselves out of it,” he said.

However, Yadav said three months is too less to rate performance of a government.

“This government was earlier fighting with so called internal problem of the party and now struggling with LG so I think some time should be given to the party,” he said.

Having a similar stand, Prashant Bhushan said, “Delhi is not a full state and is essentially a union territory with some special status and as per constitution and law, posting of officers primacy is given to Lt Governor. This is my independent legal opinion.”

“The way Delhi government has raised this issue of not complying with LG’s order, locking officers’ room and creating constitutional crisis is very dangerous. Delhi government can move court against central government over this issue. But, this brinkmanship attitude is not good as Delhi government and people of this city will suffer,” Bhushan said.