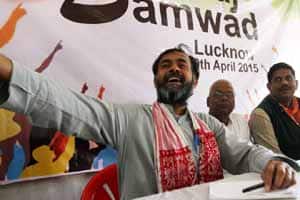 Over claims by the Bharatiya Janata Party (BJP) and Modi government that unlike during UPA rule, there was no corruption in last one year, Yogendra Yadav said, "It would be silly to say that there has been no major scandal". (Express photo by Prem Nath Pandey)

He also alleged that Modi government’s policies were “unashamedly anti-farmer” and no different from Manmohan Singh government’s, leading the country on the same “disastrous” path, only at a much faster pace.

Yogendra Yadav alleged that the government has not shown much will to take on corruption.

“It is a government that does not understand the democratic autonomy of institutions and it has not shown much of a will to take on corruption and institute transparency. It doesn’t even understand the challenge of education and health and employment which are big concerns of our country,” he alleged.

Yogendra Yadav said the performance of the government has been a disappointment.

Over claims by BJP and Modi government that unlike during UPA rule, there was no corruption in last one year, Yadav said, “It would be silly to say that there has been no major scandal. Even during the first year of Manmohan Singh government, no major scandal was exposed.

He said, “Scandals are only discovered after the auditing cycle is over and if the auditor is there in place. And in this one year of Modi government, institutions like CVC and CIC are practically not functioning so how can you expect any information to come out.”

“If these watchdog institutions are not working and if they don’t have the appointment of key persons, how do we expect (any scams to come out),” he pointed out.

“The past records of corruption of both Congress and BJP are terrible but currently our focus is on BJP because it came to power on promises of reducing corruption, and they (BJP) have done no better till date,” Yadav said.

He said “if you judge this government by what it promised and its rhetoric, then of course nothing has come out from it and it is a joke”.

“At the same time, if you judge this government by standard of Manmohan Singh government’s last one year, then anyone in the world would be more successful. It is not the yardstick that I use,” said Yadav, who was ousted from Aam Aadmi Party in April after a bitter spat with top leadership.

He said, “If you use a more serious yardstick of what the government can do in first one year, I would say its been an year of disappointment”.

On formation of Niti Aayog, Yadav said that changes in nomenclature don’t lead to any major changes in the country and there is no fundamental difference in policies from the past.

He claimed, “When it comes to the ordinary people of the country there are no fundamental changes in policies of Manmohan Singh and Narendra Modi governments. They have the same frame of economic policies. One was walking little slow and another says it’s walking fast, but the road is a disastrous road and that is what matters.”

“If Modi what claims to be walking faster on the road, he would end up harming the people of this country even more than Manmohan Singh.

“This model of development is not going to bring something good for the ordinary people of this country,” he said.