With non-communicable diseases (NCDs) claiming nearly five million lives in India every year, the Centre today said yoga can help control these diseases and that the ancient Indian practice is being encouraged as an integral part of their prevention and management. 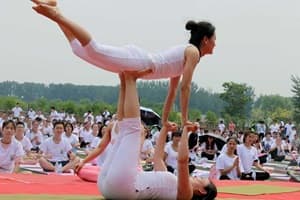 With non-communicable diseases (NCDs) claiming nearly five million lives in India every year, the Centre today said yoga can help control these diseases and that the ancient Indian practice is being encouraged as an integral part of their prevention and management.

Launching a campaign on non-communicable diseases (NCDs) to generate awareness among the people and an M-Diabetes initiative where people can get information on prevention and management of diabetes through a missed call, Health Minister J P Nadda said prevention of diseases, whether non-communicable or communicable, will remain at the forefront of his government.

“Yoga is not only physical activity but also a complete science of living. Yoga as an intervention is being encouraged as an integral part of NCD prevention and management,” Nadda said at a national conference on ‘Prevention and Control of Major NCD in India’.

“Prevention of disease will always remain in the forefront, whether for communicable or NCD and awareness regarding a balanced lifestyle and healthy living is a crucial pillar in combating NCDs,” Nadda said.

Nadda said as most of major NCDs, generally labeled as ‘lifestyle diseases’, are acquired, there is an urgent need for paying attention to their preventive aspects and social behaviour change plays a major role in preventing NCDs.

Minister of State for AYUSH Shripad Yesso Naik said there is a need for a holistic approach for maintaining good health and to integrate traditional medicinal practices and healthy lifestyle for leading a healthy life.

According to the World Health Organization, every year, roughly 5.8 million Indians die from heart and lung diseases, stroke, cancer and diabetes.

Highlighting the importance of yoga in preventing and control of NCDs, especially diabetes, WHO India Representative Henk Bekedam stressed the need for taking up multi-sectoral efforts.

He said the risk factors are closely related to social behavior and maintained that the focus should be on advocacy, awareness, access, alliance and accountability.

Union Health Secretary B P Sharma said that diseases, including NCDs, impose a high financial burden on the families and there is a need for a multi-sectoral and convergent approach for prevention and control of NCDs.

Saumya Swaminathan, DG, ICMR, said that there is a huge potential for control and prevention of NCDs through early screening even as she emphasized on understanding the socio-economic and cultural contexts in countering rising NCDs.

As per the M-Diabetes initiative, a patient can give a missed call to a number to get information on diabetes and how to prevent and manage it.

Launching the guidelines for screening of diabetes, hypertension and cancer, Nadda said it will help the programme managers plan and implement the screening at mass level.

In addition, the Minister launched training manuals for different levels of health workers who are engaged in NCD prevention and control, survey of risk factors for NCDs to generate prospective national level estimates.

Launching the second round of Global Adult Tobacco Survey (GATS-2) for systematically monitoring adult tobacco use and tracking key tobacco control indicators, he said GATS-2 will interview about 76,000 males and females aged 15 years and above from about 2,500 selected geographical units across the country.