Yasin Bhatkal, 4 others sentenced to death in Hyderabad blast case 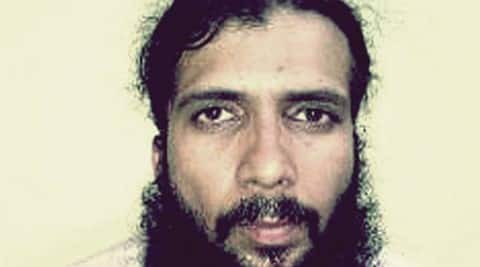 On December 13, the NIA court had convicted the Indian Mujahideen terrorist Yasin Bhatkal and four others in the case. The IM co-founder was arrested in 2013.

The twin blasts in Hyderabad’s Dilsukhnagar area had claimed 18 lives on February 21, 2013. The blasts were triggered by IEDs planted near Konark and Venkatadiri theatres in the market area of the city.

Bhatkal, who hails from Bhatkal village of Udupi district in North Karnataka, is accused in a number of terror attacks in Pune, Delhi, Ahmedabad, Surat, Bangalore, and Hyderabad.

The main accused in the case and key conspirator, Riyaz Bhatkal, is still absconding.

This was the first ever conviction of banned IM cadres in a terror case.

Apart from 18 deaths, the twin blasts had also injured 131 other people.

The absconding Riyaz Bhatkal is believed to be operating from Karachi.The trial in the court had ended last month. As many as 157 witnesses were examined in the trial that started on August 24, 2015.

On Tuesday last, NIA Director General Sharad Kumar had told PTI “it was a wonderful investigation carried out by the team in which every evidence was examined minutely. This is the first ever conviction of Indian Mujahideen cadres.”

“We will be appealing for maximum punishment for the culprits,” Kumar said.

According to the NIA charge-sheet filed in connection with the twin blasts case, the IM had planned a conspiracy to wage a war against India and carry out blasts in Hyderabad to take further their goal.