Rahul Gandhi is on a roll these days with new found aggression, thanks to demonetisation and, perhaps, the threat of losing political space to a rapidly rising Arvind Kejriwal. 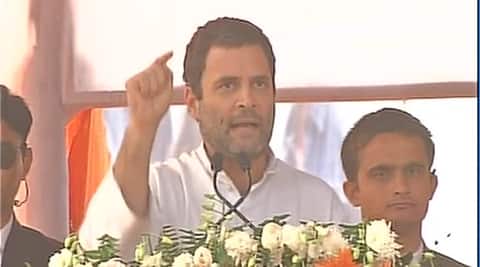 Rahul Gandhi is on a roll these days with new found aggression, thanks to demonetisation and, perhaps, the threat of losing political space to a rapidly rising Arvind Kejriwal. The Congress vice-president has started talking in the language of the common man. He is dealing in “jumlas”. One doesn’t know whether Rahul has hired a street-smart speech writer or he has learnt it all from Prime Minister Narendra Modi- the man who is on a mission to see a “Congress-mukt Bharat.”

Consider some of the comments Rahul made against Prime Minister Narendra Modi at a rally in Jaunpur, Uttar Pradesh today: “Modi gave a Rs 1200-crore toffee to Vijay Mallya after November 8 (the day when PM Modi shocked the country by announcing demonetisation)… Modi has fire-bombed the poor… Modi made 99% honest poor people bleed without asking them.”

On Thursday last, Rahul claimed he had proof of personal corruption against PM Modi and made the media go crazy speculating over the “proof” he had. Next day, Rahul met the PM and no such proof came to light. Rather, Rahul talked about farm loan waiver with the PM.

PM Modi used to make similar illogical claims and talk in the language that would sway the crowd before 2014 General Elections. One of such statements continues to haunt the PM and the BJP. He had said there was so much Indian black money hoarded in foreign banks that every citizen can get Rs 15,000,00 in their accounts if he becomes the PM. It is another story that he transformed into a statesman after becoming the PM, but never left being in the election mode and the “promised” Rs 15,000,00 per person never came.

Now, the PM has started demonetisation and cashless economy drives but the opposition is not convinced that it can curb black money and corruption. Rahul continues to ask: “Where is the promised Rs 15,000,00 Modi Ji?”

People love to listen cheap, sensational things. This is an irony, but true. Aam Aadmi Party (AAP) chief Kejriwal learnt this early. Rahul appears to have learnt it as well.

The days of a sensible Atal Bihari Vajpayee or a silent Manmohan Singh is over. From Delhi’s Kejriwal to Kolkata’s
Mamata Banerjee or even PM Modi, being loud is the hallmark of present-day politics. Rahul is also not behind now. But, for how long will he have to shout?