Whose Gandhi is he anyway? Political slugfest over legacy on Mahatma’s 150th anniversary

In undertaking Gandhian-style ‘padyatra’ (foot march), which is Gandhi’s most-favoured way to reach out to the masses, both BJP and Congress followed his footsteps to get the better of each other in claiming Gandhi’s legacy. 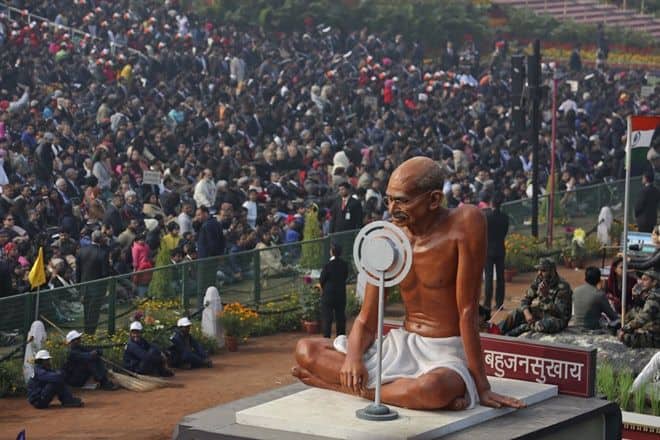 Gandhi led the Dandi march in 1930 from Sabarmati Ashram, where PM Modi will pay a visit this evening

As the nation celebrates the 150th birth anniversary of Mahatma Gandhi, a political slugfest has broken out across the political spectrum over the rightful claim to the legacy of Gandhi. Gandhi Jayanti celebrations across the country soon turned into a game of one-upmanship between the Congress and the BJP with both organising marches across the country in their bid to cash in on his legacy.

In undertaking Gandhian-style ‘padyatra’ (foot march), which is Gandhi’s most-favoured way to reach out to the masses, both BJP and Congress followed his footsteps to get the better of each other in claiming Gandhi’s legacy.

Mahatma Gandhi hailed from Gujarat and so do Prime Minister Narendra Modi. To strike a connect with Mahatma Gandhi on his 150th birth anniversary, PM Modi will visit the Sabarmati Ashram, one of the many residences of Mahatma Gandhi, today and later declare the country open defecation-free. Gandhi also led the Dandi march, also known as the Salt Satyagraha, in 1930 from this base.

Congress too boasts of connection with Mahatma Gandhi given the fact that he was the party president in 1924. Under the leadership of Mahatma Gandhi, Congress became the principal leader of the Indian independence movement.

Back from history to today, in an ambitious bid by the Bhartiya Janata Party (BJP) to claim the legacy of Mahatma Gandhi, party president Amit Shah kicked-off a four-month-long exercise as part of “Gandhi Sankalp Yatra” under which its leaders across the country will undertake foot marches and address public events.

Rashtriya Swayamsevak Sangh (RSS) chief Mohan Bhagwat claimed that Mahatma Gandhi had visited RSS shakha during the time of Partition, interacted with swayamsevaks and expressed joy over their discipline and the absence of divisive feelings over caste and creed among them.

Congress was not behind in the race as top Congress party leaders, including Rahul and Priyanka Gandhi, undertook “Gandhi Sandesh Yatra” in Delhi while Sonia Gandhi administered an oath on Gandhi’s ideals to party workers. The grand old party has been facing increasing political marginalisation after their massive electoral defeat in the Lok Sabha elections 2019.

Taking a swipe at the present BJP leadership, Congress president Sonia Gandhi said “those who consider themselves supreme and indulge in the politics of falsehood” will never understand Mahatma Gandhi’s sacrifices and ideals. “Mahatma’s soul would be pained by what has been happening in India in the last few years,” she added.

In Lucknow, Samajwadi Party chief Akhilesh Yadav too trained guns at the BJP and said those who never walked on Mahatma Gandhi’s path of truth, non-violence and social harmony are now celebrating his 150th birth anniversary. “They should first speak the truth and then talk about Gandhi,” the Congress general secretary said.