Who is Vijay Kumar Sinha? Assembly Speaker who could be key to Nitish Kumar’s Bihar gambit

A staunch RSS worker, Sinha’s tenure as Assembly Speaker has been replete with frequent run-ins with Nitish Kumar and the JD(U) on a range of issues. 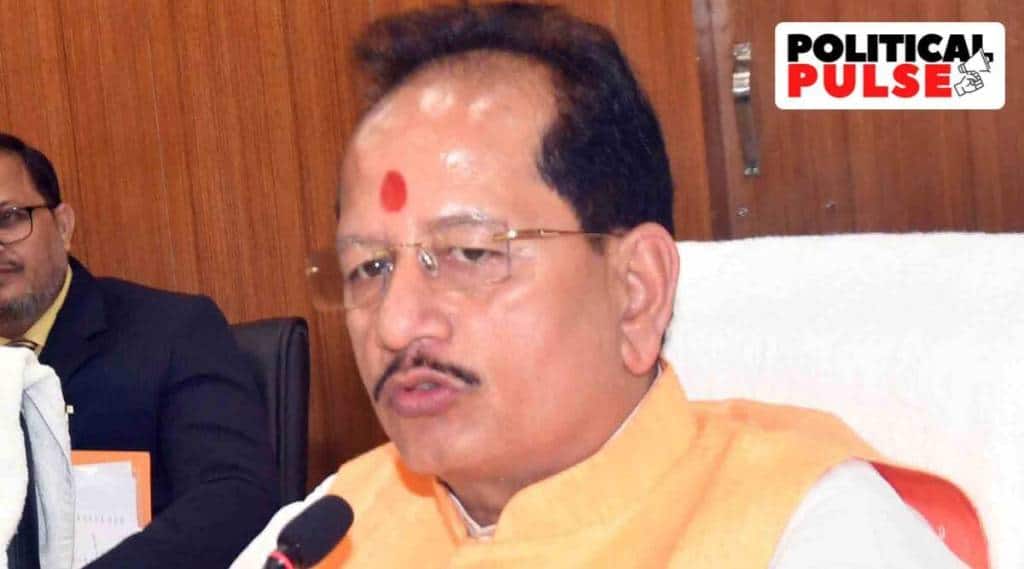 Amidst the upheaval, the man who will be the most closely watched will be Vijay Kumar Sinha, Speaker of the Bihar Assembly. (IE)

On a turbulent day in Bihar’s politics, Nitish Kumar Tuesday submitted his resignation as Bihar Chief Minister to Governor Phagu Chauhan, and announced that he has snapped ties with the Bharatiya Janata Party and walked out of the National Democratic Alliance. He is now expected to meet the Governor again with Rashtriya Janata Dal leader Tejashwi Yadav to stake claim to form the government again in Bihar.

Amidst the upheaval, the man who will be the most closely watched will be Vijay Kumar Sinha, Speaker of the Bihar Assembly. Nitish Kumar’s bete noire, Sinha has had several run-ins with the Bihar CM. Nitish, on his part, has not been particularly too fond of the Speaker either and is believed to have repeatedly demanded that he be removed from the post. The BJP, however, did not heed to Nitish’s demands.

And it could play in the BJP’s favour given the unfolding situation in Bihar, as bleak a possibility as that may sound. The sequence of events that unfolded in the last 48 hours offers an indication of what may be coming. Speaker Sinha tested Covid-19 positive on Sunday, when Nitish set the ball rolling on bringing down the government. A day later, he is believed to have made a miraculous recovery and tested negative.

First on his agenda after his recovery was a meeting with members of the Ethics Committee of the Bihar Assembly, which BJP leader Ram Narayan Mandal heads. While specific details of what transpired at the meeting were not immediately available on record, BJP sources said the report was about a March 2021 incident when RJD MLAs had allegedly held the Speaker “hostage” and police had to be called to the Assembly, The Indian Express reported.

Crucially, the report indicts about 18 MLAs of the RJD, who will receive a notice as per the laid down procedure. The Speaker, as per the rules, has the powers to decide the further course of action against them, and even order their disqualification.
With a strength of 79 MLAs in the 242-member House, the RJD is the single-largest party in the Assembly. Nitish Kumar’s plans to form a government with the RJD could face a setback if the Speaker decides to go through with the disqualification of these 18 MLAs.

A dedicated worker of the Rashtriya Swayamsevak Sangh, Sinha has served as MLA from Lakhisarai, winning the constituency three times in a row since 2010. A Bhumihar leader, he is an engineer by qualification and also the first leader of the BJP to be appointed the Speaker of the state Assembly.

His appointment has come as a surprise to many given his upper caste credentials. However, it was later justified as a move to pacify the upper caste leadership of the saffron party’s state unit.

Sinha’s tenure as Speaker so far has been ridden with frequent direct run-ins with the Chief Minister of Bihar. In one instance, Nitish had taken strong exception to Sinha omitting his name in the invitations sent out to mark the anniversary celebrations of the Bihar Legislative Assembly.

This wasn’t the first face-off between the two leaders though. In March this year, Nitish had made his displeasure known when Sinha asked minister Bijendra Yadav, twice, to inform the House about the steps taken in an incident involving police action in his Assembly constituency Lakhisarai. Nitish and Sinha had sparred over whether a matter under investigation by the government, which had also been referred to a privilege committee, could be repeatedly raised on the floor of the House.

Matters came to such a pass with Kumar that Sinha excused himself from the Chair and returned only after the CM met him personally and reconciled.

In March this year again, Bihar Assembly saw a heated exchange between Panchayati Raj Minister Samrat Chaudhary, a JD(U) leader, and Sinha when the latter complained that online replies were not reaching his office. Chaudhary had contested this, and said: “Vyakul hone se kaam nahin chalega (Getting restless will not do)”. The Speaker took strong exception to the minister’s remarks and stayed away from the House till Chaudhary apologised.