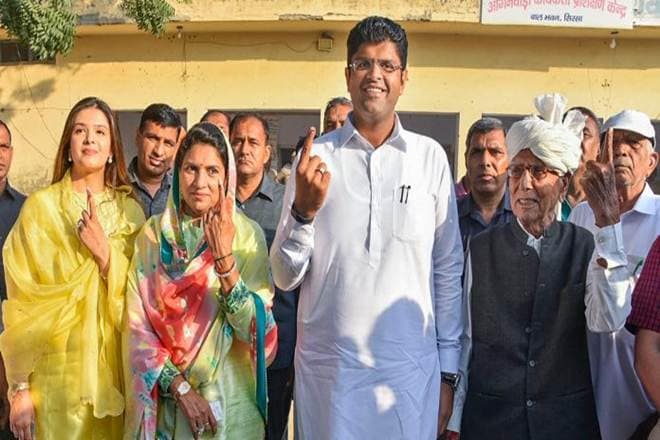 In the 2014 Lok Sabha elections, Dushyant Chautala defeated Kuldeep Bishnoi of the Haryana Janhit Congress by a margin of 31,847 votes to become the youngest ever elected MP for which he holds a record in the 'Limca Book of Records' (PTI Photo)

Dushyant Chautala emerges as kingmaker: Almost a year after Dushyant Chautala formed Jannayak Janta Party (JJP) after splitting from the Indian National Lok Dal (INLD), the 31-year-old Jat leader has convincingly established that he is a force to reckon with in the state. Chautala appears to have gained the confidence of its core voter base — the Jats — in the Haryana Assembly elections 2019. As per Election Commission data, his party has won two seats and is currently leading on 8 other Assembly constituencies as it moves ahead in cementing its position at the third place in the final tally.

The JJP sprung a surprise as the trends and initial Haryana Assembly results indicate a fractured mandate. The Bharatiya Janata Party (BJP) and the Congress are in a neck-to-neck fight in the state with both currently leading on 37 and 35 seats, respectively, according to latest Election Commission trends. The halfway mark to reach the majority in 90-member Haryana Legislative Assembly is 46 and none of the two major parties appears to be nearing that mark on their own.

Who is Dushyant Chautala? All you need to know about him

— Dushyant Chautala is the great-grandson of former Deputy Prime Minister Chaudhary Devi Lal and grandson of former Haryana Chief Minister and INLD president Om Prakash Chautala, who is lodged in jail along with his elder son Ajay Chautala.

— Former MP and Dushyant’s father, Ajay Chautala was considered as his father’s natural heir only till he was lodged in jail along with senior Chautala for 10 years in the JBT teachers recruitment scam.

— During the absence of Om Prakash Chautala from active politics, his younger son Abhay ran the party. However, rising political ambitions triggered an ugly fight within the party leadership and the family, prompting Dushyant to part ways from his family’s political outfit.

— Haryana Assembly Election results suggest that Dushyant Chautala has managed to make a dent in INLD’s voter base. While the INLD is leading on just one seat, Jannayak Janta Party is expected to win at least 10.

— During the election campaigning, Dushyant appealed to the voters to vote for JJP considering it as the “real representative of the legacy of Chaudhary Devi Lal”.

— His great grandfather Devi Lal was a popular leader and was often called “Jannayak”. This is precisely the reason why Dushyant claimed he used “Jannayak” in the party’s name while floating his party.

— In the 2014 Lok Sabha elections, Dushyant Chautala defeated Kuldeep Bishnoi of the Haryana Janhit Congress by a margin of 31,847 votes to become the youngest ever elected MP for which he holds a record in the ‘Limca Book of Records’.

— Dushyant holds a graduate degree in business administration from California State University, Bakersfield, USA. He is married to Meghna Chautala.