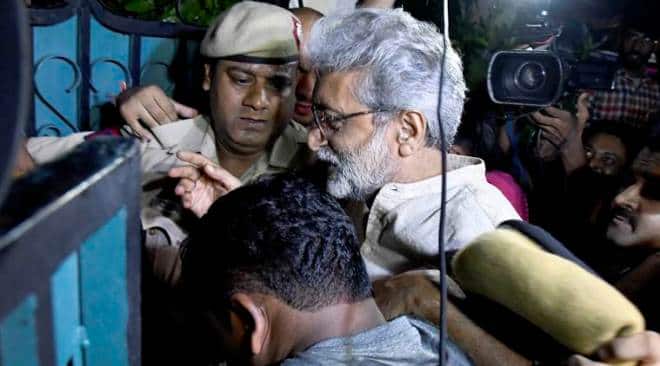 Five human rights activists – Gautam Navlakha, Varavara Rao, Arun Ferreira, Vernon Gonsalves, Sudha Bharadwaj – have been arrested in connection with organising ‘Elgaar Parishad’, an event to mark the 200th year of the Battle of Bhima Koregaon on January 1, 2028. The event was hit by violence and the police reportedly recovered a letter which mentioned an alleged plan to assassinate Prime Minister Narendra Modi.

Following the recovery of the letter, the police initiated a probe into the alleged Naxal link in the matter, which has now led to the arrests of these activists. Opposition parties and a number of civil right activists have condemned the police action dubbing it as an attempt suppress those who criticise the government. Of the five who have been held, three will be produced in court today.

Here’s a look at the track record of the 5 activists who were arrested after nation-wide raids:

Varavara Rao: Popularly known as VV Rao, is a known activist and poet who hails from the state of Telangana. He had played an active part in the Telangana movement before the formation of the state. He is a self-declared communist. In 2001, Rao represented the Maoist organisation Communist Party of India (Marxist-Leninist) Peoples War as an emissary when Andhra Pradesh’s Telugu Desam government accepted a proposal to have peace negotiations with Naxalites. He has been arrested thrice by the government.

Arun Ferreira: A Mumbai-based human rights activist and lawyer and an alumnus of St Xavier’s college, Ferreira was arrested in 2007 on the charges of being a Naxal operative but was later acquitted. His work for Navjan Bharat Sabha was alleged to be an activity for Naxalites, Times Of India reports. He was charged in 11 cases, of which he was acquitted in 2011.

Vernon Gonsalves: He was also arrested on the charges of helping banned Naxalite organisations in 2007. In 2013, he was convicted under Arms Act. However, he was released as he had already undergone the period he was sentenced for.

Sudha Bharadwaj: She is an activist and lawyer. Bharadwaj currently serves as the national secratary of the People’s Union for Civil Liberties (PUCL). Bharadwaj has worked as a civil rights activist in Chhattisgarh for close to three decades. According to reports, she had given up her US citizenship to work for the people’s cause in India.

Gautam Navlakha: Arrested from New Delhi, Navlakha has worked as a secretary of the People’s Union for Democratic Rights (PUDR). The civil rights activist has also been a convener of the International People’s Tribunal on Human Rights and Justice in Kashmir. In the recent times, his work was focussing on Maoist influenced areas of Chhattisgarh.

In the current case, the Delhi High Court stayed the transit remand of Navlakha till Wednesday and directed that he be confined to his home. The court held that police were not able to “satisfactorily” explain the offence for which Navlakha had been arrested.