Even as the Indian government was pressing it not to show the controversial documentary on the December 16 gangrape, BBC decided to go ahead with its telecast. 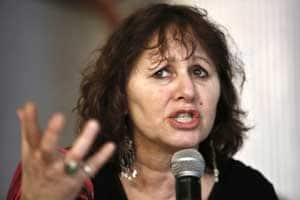 British filmmaker Leslee Udwin speaks during a news conference in New Delhi March 3, 2015. A new documentary based on the fatal gang rape of a woman in New Delhi in 2012 highlights gender inequality and sex crimes in India, with the seeming lack of remorse among those convicted of the crime shocking even the film's director. (Reuters)

Even as the Indian government was pressing it not to show the controversial documentary on the December 16 gangrape, BBC decided to go ahead with its telecast, saying that the film had handled the issue “responsibly”.

Originally, BBC had decided to show it on March 8, coinciding with International Women’s Day, but suddenly decided to advance it even as a storm was raging in India, saying it will enable viewers to see this “incredibly powerful documentary at the earliest opportunity”.

In a statement here, BBC said the documentary- Storyville-India’s Daughter, will be telecast in the United Kingdom on BBC Four at 10 pm on March 4, 2015.

“This harrowing documentary, made with the full support and cooperation of the victim’s parents, provides a revealing insight into a horrific crime that sent shock waves around the world and led to protests across India demanding changes in attitudes towards women,” it said.

The statement said the film handles the issue “responsibly” and fully complied with BBC’s editorial guidelines.

“The film handles the issue responsibly and we are confident the programme fully complies with our editorial guidelines.

“The BBC will broadcast Storyville India’s Daughter, in the UK on BBC Four. The documentary has the backing of a number of other public service broadcasters, however the BBC is only responsible for transmission of the film in the UK,” the broadcaster said.

The BBC statement came on a day the Indian Parliament witnessed outrage over the interview of gangrape convict, prompting the Modi government to promise an indepth inquiry and disallowing its telecast.

“Under no circumstances, this documentary will be allowed to be broadcast… Government has taken necessary action and secured an order restraining the telecast of the film,” Union Home Minister Rajnath Singh told Parliament.

The documentary included an interview conducted by British filmmaker Leslee Udwin and BBC, of Mukesh Singh, the driver of the bus in which the 23-year-old paramedical student was brutally gangraped by six men on December 16, 2012. Mukesh has made derogatory statements against women, Delhi police said.

A Delhi court has restrained media from publishing, broadcasting, telecasting or uploading the interview on the internet.

On her part, Udwin appealed to Prime Minister Narendra Modi to view the documentary, which, she said, was a “gift to India”, before any action was taken on it.

She said India has shown the lead globally in the wake of the horrific crime which had led to protests across the country. Rape was an issue of global concern which she has highlighted in the documentary, she said.

The BCI Chief said he had considered various statements of some senior members of the bar that such remarks should be taken note by the lawyer’s body.

One of the defence lawyers in the December 16 gang-rape case, advocate M L Sharma has reportedly given a statement reflecting gender bias.

In the controversial BBC documentary on the gang rape, Sharma reportedly said such incidents of rape are bound to happen if girls go out without proper security.

Govt exploring how documentary telecast can be stopped abroad: M Venkaiah Naidu
Government on Wednesday said there is a “conspiracy to defame” India through the telecast of the documentary containing the interview of December 16 gangrape convict and would explore ways how its screening can be stopped even abroad.

Participating in a debate on the issue in Lok Sabha, Parliamentary Affairs Minister M Venkaiah Naidu said the telecast of the film can be banned in India but there is a conspiracy to defame India and the documentary can be telecast outside.

“We can ban the documentary in India but there is a conspiracy to defame India and the documentary can be telecast outside. We will also be examining what should be done”, Naidu said adding “The Home Minister has said he will talk to the I&B Minister and find out what is the way.”

Parliament witnessed outrage over the interview of Nirbhaya gangrape convict, prompting the government to promise an indepth inquiry and disallowing its telecast even abroad.

Members, cutting across party lines, questioned how permission was granted for interview of such a person and wanted a probe to find out who gave the go-ahead.

Women members in both Lok Sabha and Rajya Sabha were in the forefront of expressing their anger at the remarks made by the convict and said it reflected the “mindset” in the society.

Sharing anger of the members in both Lok Sabha and Rajya Sabha, Home Minister Rajnath Singh said in both Houses of Parliament that he has already spoken to the Information and Broadcasting Minister and told him that necessary steps be taken so that the documentary was not broadcast even abroad.

Bassi told reporters after the meeting that they were focusing on the “criminality of the case and violation of law” and arrests will be made based on findings of the probe.

“During the meeting with the Home Minister, various matters were discussed along with the controversial issue. I have briefed the minister in detail,” he said.

Delhi Police had on Tuesday registered an FIR and secured a court order restraining the media from airing the interview which has triggered a storm and wherein the convict, Mukesh Singh, shows no remorse over the crime which shocked the nation.

“And today we took a regular order from a competent court and informed BBC and other channels against broadcasting and uploading of the video of the interview on internet and so that nobody violates the law,” he said yesterday.

In the interview conducted by British filmmaker Leslee Udwin and BBC, Mukesh, the driver of the bus in which the 23-year-old paramedical student was brutally gangraped by six men on December 16, 2012, has made derogatory statements against women, police said.

“Reading of media reports in this matter suggest content of the video violates law. So, we started investigation and will examine necessary witnesses. Our attempt is nobody circulates this video as it violates law, Bassi added.

Sources said that police has also written to video sharing websites like Youtube and others to ensure that the documentary is not available on them while similar efforts will be made to block the text of the interview from appearing on internet as well.

The police chief however refused to comment over the alleged use of the video for commercial gains.

“As far as this particular part is concerned, appropriate department will take action. We are concerned with criminality of the case and violation of law. The issue of violation of terms and conditions of commercial clause will be looked into by ministry of Information and Broadcasting and Tihar jail,” Bassi said.

“What we can assure you is that we will investigate the case on merit to ensure anybody who has transgressed the penal laws is brought to book,” he added.

Bassi though declined to comment over the impact the video would have caused if the interview is broadcast.

“I would not like to get into any speculative discussion. As far as I am concerned, my charter is very clear. If anyone transgresses IPC laws, I have to take action. If any matter falls in the domain of cognizable offence, I have to register an FIR. I have already registered an FIR.

Lt Governor Najeeb Jung, who reportedly also attended the meeting, refused to make a comment in this connection. Speaking to reporters earlier during the day, Bassi had said that it will probe as to why the contents of the work were not shown to the relevant authorities.

“Why the permission was given doesn’t fall under the ambit of our investigation, what does is the content of the interview, which was not shown to the authorities concerned.

“Prima facie, there is no criminality in giving permission for an interview,” he said, adding that the documentary filmmaker was allowed to hold the interview under certain conditions, one of which was that it should contain nothing against the law.