Weather forecast in India: The meteorological condition in the country is likely to take a change for the worst in many places. 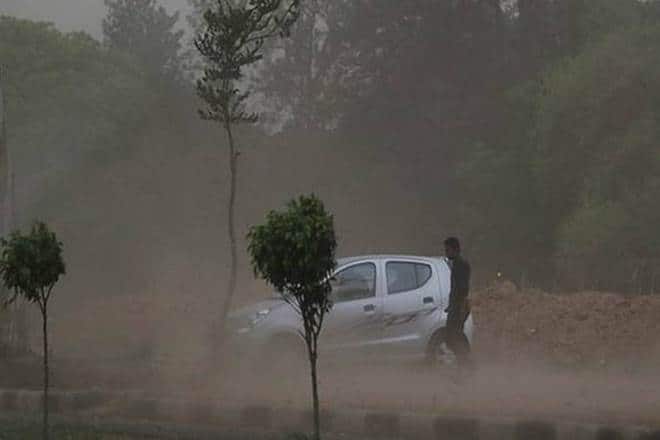 According to the MET department, isolated places over Uttar Pradesh, Gangetic West Bengal and Jharkhand are likely to be affected by Thunderstorm accompanied with squall. (Photo: IE)

Weather forecast in India: The Weather condition across the country is likely to take a change for the worst in many places. The India Meteorological Department has issued a warning for states like West Rajasthan, MP, Uttar Pradesh, West Bengal, Jharkhand, Uttarakhand, Bihar and Odisha among others for tomorrow. According to the MET department, isolated places over Uttar Pradesh, Gangetic West Bengal and Jharkhand are likely to be affected by Thunderstorm accompanied with squall. It added that the Thunderstorm accompanied with gusty winds is likely to affect isolated places over Uttarakhand, Bihar and Odisha tomorrow. While the states in north India are likely to be affected by Thunderstorm tomorrow, Coastal and the northeastern states are likely to be hit by heavy rain.

Meanwhile, 15 people lost their lives, while 10 others were injured as thunderstorm and lightning affected various parts of Uttar Pradesh in the early hours of Wednesday. UP Relief Commissioner Sanjay Kumar while talking about the incident said, “While six persons were killed in Unnao in incidents of thunderstorm and lightning last night, three persons died in Raebareli, and two each in Kanpur, Pilibhit and Gonda districts.” Among those people who were injured in the thunderstorm, Kumar added that four belonged to Unnao and three each from Kannauj and Raebareli. he further said that the incident had also damaged some hutments in Unnao and Rae Bareli districts of the northern state.

In order to ensure rescue works and the distribution of relief in 24 hours, the Principal Secretary (Information) Awanish Awasthi said that the respective district magistrates have been directed orders for the same. According to Ravikumar, the Unnao District Magistrate, two people lost their lives due to lightning while the others died in incidents where houses collapsed, trees and electric poles were. Because of the uprooted trees on the main Hardoi-Unnao road, the movement of traffic was hit. However the trees were later removed and the road was cleared, DM added.