In a huge surprise, Congress Vice-President Rahul Gandhi’s yatra in Uttar Pradesh, which reached Allahabad today, manage to generate a huge turnout, giving Congressmen some relief, after fears were raised whether there will be anyone around at all. 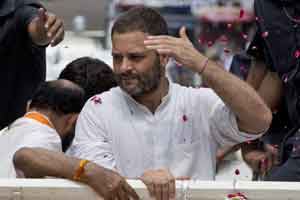 On Thursday, Rahul had hit out at Prime Minister Modi accusing him of "hiding behind the blood of soldiers" and said that he was politically exploiting their sacrifices. (PTI)

In a huge surprise, Congress Vice-President Rahul Gandhi’s yatra in Uttar Pradesh, which reached Allahabad today, manage to generate a huge turnout, giving Congressmen some relief, after fears were raised whether there will be anyone around at all. This is part of Gandhi’s Kisan Yatra being taken out as a precursor to the forthcoming Assembly elections.

A visibly pleased Rahul Gandhi was seen perched high on an open-top truck as he waved and interacted with the gathered crowds in the town festooned with Congress flags and confetti. The start of the yatra today was from statue of Chandrashekhar Azad, where Gandhi paid his respect after garlanding the statue.

As the convoy started, tens of thousands of people were seen lining up by the side of the roads waving at the Congress scion. Allahabad is the ancestral town of the Nehru-Gandhi family and he had spent Wednesday night at Anand Bhawan (ancestral home).

Among the other areas that he visited were Swaraj Bhawan and Katra. He had a full day chalked up ahead of him including visiting the statue of the former UP Chief Minister Hemwati Nandan Bahuguna. He also held his ‘khaat chaupal’ in the Manjhanpur state assembly constituency in Kaushambi district. In between he also addressed a public rally.

In his speeches through this period, Rahul Gandhi tore into the Samajwadi Party government in Uttar Pradesh for failing to get the economy moving, and generate jobs for the youth. He also took a dig at the ongoing family controversy in which a power tussle is happening between Akhilesh and his uncle. He also did not spare Mulayam Singh Yadav and his ‘links’ with the Bharatiya Janata Party (BJP). In the same vein, Gandhi also took on PM Narendra Modi for making promises to the people that he has not been able to deliver on while providing ‘benefits’ to businessmen.