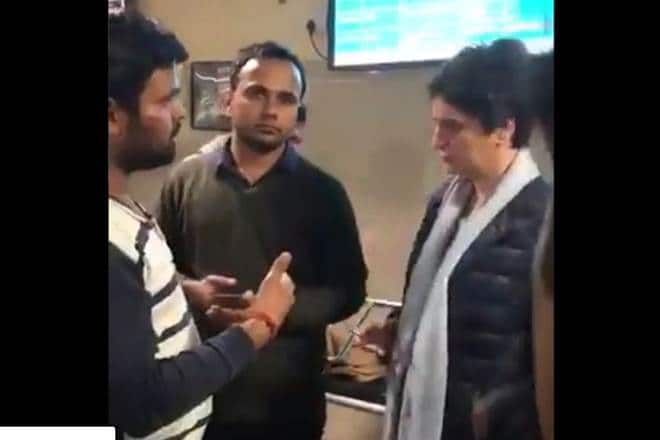 Congress leader Priyanka Gandhi Vadra allegedly snubbed the injured ABVP activists during her visit to the AIIMS trauma centre to meet injured activists of JNU. When ABVP worker Shivam Chaurasia spotted Priyanka at the hospital, he approached her and tried to explain to her how he too suffered injuries at the hands of SFI and AISA members. Priyanka heard him for a few seconds before looking away from him without any response.

A video of the incident, tweeted by ABVP from its official handle, shows officials accompanying Priyanka stopping Shivam from speaking to her. She then left the place without listening to him.

The video of the incident, tweeted by ABVP, is captioned, “Priyanka Gandhi gives cold shoulder to ABVP activist Shivam while he tries to tell her how leftist goons beat him up. It is saddening to see that Priyanka Gandhi’s empathy sees ideology before lending help! You have put humanity to shame, madam.”

The Congress leader visited AIIMS on Sunday night to meet injured JNU students. Violence broke out at the varsity on Sunday after a masked mob attacked teachers and students using bricks and sticks. While JNUSU alleged that ABVP workers were behind the incident, the BJP-linked student’ body accused the Left-linked workers of beating them.

Priyanka Gandhi gives cold shoulder to ABVP activist Shivam while he tries to tell her how leftist goons beat him up.

It is saddening to see that @priyankagandhi’s empathy sees ideology before lending help! You have put humanity to shame, madam.#BanAISASFI #LeftAttacksJNU pic.twitter.com/3O1NIdXGgc

“Wounded students at AIIMS trauma centre told me that goons entered the campus and attacked them with sticks and other weapons. Many had broken limbs and injuries on their heads. One student said the police kicked him several times on his head,” Priyanka tweeted on Sunday after the visit.

Meanwhile, the BJP hit out at Priyanka over her several visits to meet those arrested and injured during the anti-CAA protests in Uttar Pradesh and alleged that the Congress leader understands pain selectively.

“It seems she understands the pain selectively as when she visited AIIMS trauma centre she chose to look away from the injured students who differed from her ideology. This reeks of selectivism,” party spokesperson Sambit Patra said.

Follow us on
Latest News
YOUR MONEY: Ways to create a portfolio for your child’s education
73% employers looking to increase their resource pool: TeamLease
Raymond profit zooms 198% to Rs 159 cr in Q2
Indigo Paints profit zooms 173% in Q2
At $2 mn-plus, manufacturing sector paid the biggest ransom after cyberattacks
8i Ventures raises $25 m in first close for second fund
India urges world community to collectively call out those who provide safe havens to terrorists
Photos
Heart-wrenching! Here is a look at Morbi and the suspension bridge that collapsed
3 days agoOctober 31, 2022
In Pictures: PM Modi in Kargil to celebrate Diwali with soldiers, says, ‘All of you have been my family for years now’
2 weeks agoOctober 24, 2022
In Pictures: PM Modi inaugurates Deepotsav in Ayodhya; World record set by lighting of over 15 lakh diyas
1 week agoOctober 24, 2022
Read More
×
‘Arrest me if I have committed a crime, why question’: CM Hemant Soren after skipping ED summons
Don’t spare corrupt, don’t be defensive: PM Modi to CVC and anti-corruption agencies
‘Is negligence too an act of God?’ Congress sharpens attack against BJP on Morbi bridge collapse
Gujarat Elections 2022: BJP chief Nadda says party will form govt with big majority
Gujarat elections 2022: Will saffron sweep Gujarat again? Modi to Morbi – 10 factors that could make or break BJP’s chances
Neither govt nor people serious about tackling monstrous problem: Varun Gandhi on worsening air quality in Delhi