Interpol has sought some “clarifications” from the ED before it issues a global arrest warrant against liquor baron Vijay Mallya wanted by the probe agency in a money laundering case emerging from a Rs 900 crore alleged bank loan fraud. 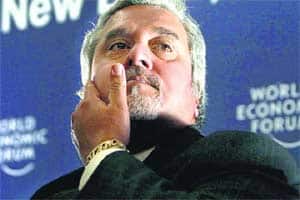 British-based Vijay Mallya, attending his first race of the year after being unable to travel abroad due to the Indian government revoking his diplomatic passport, said it had been a 'superb weekend'. (Express photo)

Interpol has sought some “clarifications” from the ED before it issues a global arrest warrant against liquor baron Vijay Mallya wanted by the probe agency in a money laundering case emerging from a Rs 900 crore alleged bank loan fraud.

Officials said the global police body had asked agency sleuths to provide to it certain detailed information on the legal processes undertaken by ED in the case before it can notify a red corner notice (RCN) against Mallya, sought by the investigating officer of the case to make the beleaguered businessman join probe in the alleged loan fraud of IDBI Bank, also being probed by CBI.

“Interpol has sought certain clarifications that are in the nature of providing additional details of the money laundering case against Mallya. The global police has not said it is denying the ED request to get an arrest warrant against him issued.The clarifications are being responded to,” agency sources said.

They said such seeking of information is done in many cases, like in the Lalit Modi case, and the agency was hopeful that it will be able to satisfy Interpol on these issues.

The agency had first sought the RCN against Mallya last month in order to make him join investigations in the case personally.

Mallya had left India on March 2 using his diplomatic passport and is believed to be in the UK.

An RCN is issued “to seek the location and arrest of wanted persons with a view to extradition or similar lawful action” in a criminal case probe.

Once the said notice is issued, the Interpol seeks to arrest the person concerned in any part of the world and notifies that country to take his or her custody for further action at their end.

Mallya and others are being probed by the ED in the over Rs 900 crore IDBI loan fraud case in which it registered a criminal case under the Prevention of Money Laundering Act (PMLA) early this year.

Britain had recently made it clear that Mallya cannot be deported and asked India to seek his extradition instead and the agency is mulling invoking the Mutual Legal Assistance Treaty (MLAT) existing between the two countries to get this job done.

The British government said it acknowledges “the seriousness of allegations” against Mallya and was “keen to assist” the Indian government in this case.

The ED is also mulling attaching domestic assets and shares worth about Rs 1,400 crore owned by Mallya in the first go.