Must Read
Are you a CEO dealing with work depression and anxiety? What is it and how to deal with it
Nitin Gadkari says 140kmph speed limit on highways soon, lane discipline norm too
Crude demand expected to increase; go long after price breaches Rs 6,500/bbl
Apple is building a benchmark tool to test real-world performance of web browsers with Google, Mozilla: Details
Pause slide 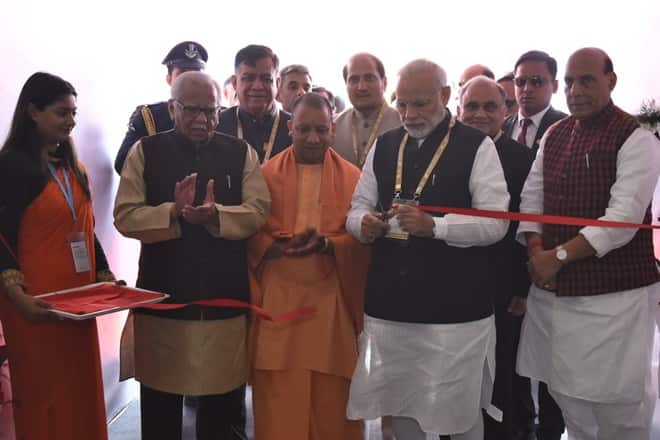 Meanwhile, a number of promises are being made by top industrialists for the development of Uttar Pradesh, which has so far been recognized as one of the most underdeveloped states of the country. Considering the size and population of the state, industrialists Anand Mahindra was right to point out that Uttar Pradesh should compete with countries, not just states of India. Over 5000 delegates are expected to participate in the summit over two days.

– Yogi Adityanath said that the summit has attracted investment worth Rs 4.28 lakh crore.

– Narendra Modi: ‘One district, One product’ scheme is unprecedented and a game changer. Next year’s Maha Kumbh’ will be the biggest such event in the world. Crores of people will visit.

– Yogi Adityanath: Our aim is to create 40 lakh job opportunities in the state in the next three years. So far we have signed 1045 MoUs. A new tourism policy has been enforced. This policy is based on religion, heritage, and eco-tourism which will promote tourism in the state.”

– Yogi Adityanath: “We have taken forward the work on Purvanchal and Bundelkhand Expressways.”

– Anupama Jaiswal, UP MoS, “UP Govt is encouraging entrepreneurship through various policy initiatives & supporting young entrepreneurs in an effort to develop the state. Friendly policies in MSME will help in making UP the manufacturing hub of India and realize Narendra Modi ji’s dream of Make In India. India’s future under Narendra Modi ji and UP’s future under Sh. Yogi Adityanath ji is safe and secure. Come be a part of this future and be a part of UP’s growth story.”

– N Chandrasekaran, Tata Group chairman: “We want to strengthen our presence in U.P. Be it in the agro, infra or social sector. Tata Sons will be a part of the vision set by our Prime Minister and will continue to increase its engagement in the state!”

– Subhash Chandra, Essel Group, and Zee Entertainment chairman: “Heartiest congratulation to Yogi Adityanath ji for this grand event…Now MoUs are not being signed just for the namesake. Uttar Pradesh is emerging as a new Uttar Pradesh.”

– Anand Mahindra: “Committed to set up an electric vehicle manufacturing plant in UP. Club Mahindra will be executing an MOU with UP Govt. for more than 200 Crores. UP should compete with countries, not states. UP is a rich state possessing natural resources in abundance. Its size makes it a country in itself and therefore, Uttar Pradesh should not compete with states but countries!”

– Handloom, Power-loom, Silk, Textile and Garmenting Policy 2017 is providing interest subsidy of 7% on loan taken for procurement of TUFS eligible plant & machinery for a period of 7 years, with the subject limit of 1.5 Cr per year and 75 lakh in GB Nagar district, said UP minister Suresh Rana.

– Gautam Adani group to invest Rs 35,000 crore in multi-model logistics. “We will stand with you in your journey of transforming Uttar Pradesh,” Adani said.

– Kumar Mangalam Birla: “Industrial investors will find several opportunities across different sectors in Uttar Pradesh today. Going forward, we will be investing in the growth of all our major businesses in next five years including telecom, cement, and chemical sectors. n next five years, we plan to invest nearly 25,000 Crores in Uttar Pradesh.”

– MOU signed with Amazon for sale of Khadi products of UP.

– Yusuffali M A, managing director of Lulu Group International and NRI investor said ahead of the Investors Summit, “I am very excited to be a part of upcoming #UPInvestorsSummit. We are unveiling and showcasing our Rs. 2000 Crore investment #LuluMall Project coming up in Lucknow, during this mega event.”

– RIL chairman Mukesh Ambani said, “I am happy to inform this audience that Jio is one of the largest investors in Uttar Pradesh with investments of over Rs. 20,000 crore…Jio has already created over 40,000 direct and indirect jobs in UP.Jio will establish a Centre for the Fourth Industrial Revolution within the campus of a reputed university in Uttar Pradesh.”

– Mukesh Ambani said Reliance Industries will invest Rs 10000 crore in the state in the next three years.

– UP Industrial Development minister Satish Mahana said around 1500 MoUs will be signed during the Summit.

– Industrialist Anand Mahindra announced that his company will set up an electric vehicle plant in the state and also make Rs 200 crore investment in infrastructure projects in Varanasi, the Parliamentary constituency of PM Modi.

– Mukesh Ambani said, ” “I am happy to announce that Reliance Jio is one of the largest investors in Uttar Pradesh with investments over Rs 20,000 crore.”

(This article is being updated; don’t miss details of Uttar Pradesh Investors Summit)