US companies can’t live without our IT players: Ravi shankar Prasad

Union IT Minister Ravi Shankar Prasad today asked software exporters not to get “perturbed” too much by the visa issue for sending professionals into their largest market, the US… 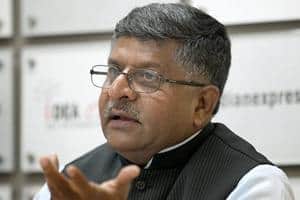 Speaking at the Express Adda in Mumbai, Prasad said, “We, who are in public life, should learn to enjoy humour, cartoon and fun. (Source: IE)

Union IT Minister Ravi Shankar Prasad today asked software exporters not to get “perturbed” too much
by the visa issue for sending professionals into their largest market, the US, saying American companies cannot “survive” without their help.

“Do not be unnecessarily perturbed by the US visa issue. I don’t think American companies can survive without our
companies. They cannot,” Prasad told a meeting organised by the industry lobby IMC.

He said concerns surrounding the visa issues have been taken up at the “highest level” and exuded confidence of
finding a solution to it.
The minister elaborated that the issue of massively hiking the visa fees apart from restricting the number of IT
professionals’ entry into the US, has been raised by Prime Minister Narendra Modi with US President Barack Obama and he himself has also discussed it with his US counterpart.

Stating that country’s IT industry has clocked exports of USD 108 billion last fiscal, Prasad said they currently serve
a majority of the Fortune 500 companies through their presence in 200 cities spanning 80 countries.

Job losses due to the shift to cheaper alternatives like India have always been a very contentious issue in the US, and
the emergence of the ultra-right Donald Trump as the Republican presidential candidate has only heightened fears in the sector.

In the past as well, domestic IT companies have had to lobby hard to ensure that adequate number of IT professionals get the required visas to serve at client locations.

On the IT and cyber security, the minister said there is a string coordination between the agencies concerned to
protect against the scourge of terrorism and specifically the threat posed by groups like the terror group IS which is using the cyberspace very proficiently.

Next Story
India beats Japan in oil use, only next to US, China