Uri terror attack: Soldiers who were martyred in the deadly terrorist strike

Seventeen soldiers of the Army were martyred in the terror attack on an Indian Army camp in Jammu and Kashmir’s Uri on Sunday. 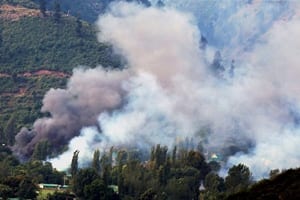 The investigators probing the deadly attack in which 18 soldiers were killed have also found that the perimeter of the highly sensitive Brigade Headquarter of the Army was not properly fenced at several places, official sources said today. (Express photo)

Seventeen soldiers of the Army were martyred in the terror attack on an Indian Army camp in Jammu and Kashmir’s Uri on Sunday. Nineteen other security personnel were also injured, some of whom are reportedly critical. The high number of casualties is being attributed to the fact that a fire engulfed the tents which soldiers were using for accommodation. Heavily armed terrorists attacked the camp in the wee hours of the morning on Sunday. The Army was able to neutralise the four terrorists behind the attack.

According to the Indian Army, 4 AK 47 rifles, 4 under barrel grenade launchers and other war like store was found with the four slain militants. DGMO Lt Gen Ranbir Singh has called up his counterpart in Pakistan expressing “serious concerns” over Pakistani markings found on the equipment. The terrorists are suspected to have belonged to Pakistan-based terror group JeM. Prime Minister Narendra Modi has strongly condemned the attack. “We salute all those martyred in Uri. Their service to the nation will always be remembered. My thoughts are with the bereaved families. We strongly condemn the cowardly terror attack in Uri. I assure the nation that those behind this despicable attack will not go unpunished,” he tweeted.

Below are the names of the soldiers who were martyred in the Uri terror attack:

Located a few kilometers from the LoC, the base was subjected to the attack by four terrorists at around 5.30 AM, causing heavy casualties in the Dogra regiment. Home Minister Rajnath Singh has directly pointed a finger at Pakistan, calling it is a “terrorist state”. Singh said that Pakistan should be isolated.

Also read: For one tooth, the complete jaw, hits out BJP’s Ram Madhav; says days of strategic restraint over

Defence Minister Manohar Parrikar and Indian Army chief General Dalbir Singh Suhag rushed to Jammu and Kashmir, following the attack. Parrikar and Dalbir Singh Suhag visited the soldiers who were injured in the attack. “Reviewed situation in Kashmir following Uri attack with Army Chief & Commanders. Instructed to take firm action against those responsible,” Parrikar tweeted. “The supreme sacrifice of 17 brave Soldiers will not go in vain. My salute to them,” he said.