After the strong stand taken by Russia on the Uri terror attack, Germany has also come out in support of India, condemning the terrorist strike. 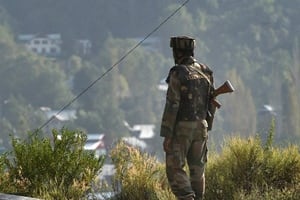 The two were arrested by the BSF and the Army in a joint operation at 'Angoor Post' at Gavalata village in Uri last Saturday when they were trying to infiltrate into India. (Source: PTI)

After the strong stand taken by Russia on the Uri terror attack, Germany has also come out in support of India, condemning the terrorist strike. German Foreign Minister Frank-Walter Steinmeier has said that the country stands resolutely with India. “As is often the case, the terrorists’ aim is for the situation to escalate; they want to trigger a spiral of violence. We must not give in to this logic, including in conflicts between India and Pakistan,” Steinmeier said in a statement. “Germany stands resolutely at India’s side in the fight against terrorism. At the Indo-German counterterrorism consultations, which will take place in a few days’ time, we will further discuss the threats to our two countries’ societies,” he added.

Not only Germany, even Japan has come out in support of India, expressing its condolences. “The government of Japan strongly condemns the terrorist attack on the Indian base in Uri, Jammu and Kashmir, and extends its sincere condolences,” Japan is reported to have said. “Japan condemns terrorism in all forms regardless of its purposes and strongly reiterates that no act of terrorism can be justified,” it said.

In what is being seen as a fallout of the Uri attack, Russia has called off its joint military exercise with Pakistan. Pakistan and Russia were scheduled to conduct the ‘Druzhba-2016’ tactical exercises from September 24-October 7 in Rattu and Cherat. The international support for India comes at a time when the Modi government is looking to globally isolate Pakistan. Some reports even suggest that India may move the United Nations to declare Pakistan as a ‘terror state’.

Four terrorists attacked an Indian Army camp in Jammu and Kashmir’s Uri on Sunday. Eighteen soldiers have been martyred in the attack and several others are injured. India has squarely blamed Pakistan for the attack. Evidence of Pakistan’s hand in Uri attack i.e, GPS tracker movements that go back to starting point in Pakistan, Pashto literature, Pakistan army marked arms will be given to Pakistan at the DGMO level.