Surgical strikes by India killed as many as nine Pakistani soldiers and 35-40 terrorists planning to infiltrate into India, TV reports said. 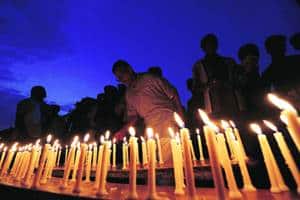 The surgical strikes on terror launch pads in Pakistan-occupied Kashmir started at 12.30 am and lasted till 4.30 am. (In pic) Citizens pay homage to Uri attack martyrs. (Express file Photo)

Surgical strikes by Indian Indian Army on the intervening night of Wednesday and Thursday killed as many as nine Pakistani soldiers and 35-40 terrorists, who were planning to infiltrate into India to carry out attacks across the country,  TV reports said today. The entire operation was planned in advance and monitored throughout the night from New Delhi by Defence Minister Manohar Parrikar, National Security Advisor Ajit Doval, Army Chief General DS Suhag and other top officials from the Army headquarters in Delhi.

The Indian Armed forces were paradropped across the border to carry out surgical strikes against terror launch pads. PTI reported that the the entire operation was a combination of heliborne and ground forces.

The operation by Indian Army’s Special Forces on terror launch pads in Pakistan-occupied Kashmir started at 12.30 am and lasted till 4.30 am. The Special Forces went up to 500 metres to 2 km across the border during the surgical strike. Sources also said that some Indian commandoes went up to three kilometres in the Pakistan-occupied region to conduct the surgical strikes.

ALSO READ: What is a surgical strike and why Indian Army conducted it across LoC?

Quoting sources, Times Now reported that 35-40 to terrorists as well as nine Pakistani soldiers were killed in the surgical strikes. Earlier today, addressing a press conference, DGMO Lt Gen Ranbir Singh said India carried out ‘surgical strike’ on terror launch pads across the LoC, inflicting “significant casualties” on terrorists and those who are trying to support them.

He said that the exercise was carried out “based on very credible and specific information which we received yesterday that some terrorist teams had positioned themselves at launch pads along the Line of Control with an aim to carry out infiltration and terrorist strikes in Jammu & Kashmir and in various other metros in our country, the Indian army conducted surgical strikes last night at these launch pads.”

The Pakistani soldiers were killed when they came to help the terrorists.

India has said it has no plans to carry out further surgical strikes, however, if there is an attack from Pakistan, India would not sit back quietly.

Meanwhile, reports said that the United States is monitoring the situation, while Pakistan has denied that there was any surgical strike by India. The US has reportedly decided not to intervene in the matter concerning India and Pakistan.