In an interview to Pakistan-based Geo news, Khawaja M Asif says his country won’t hesitate in using nuclear weapons if its security is threatened. 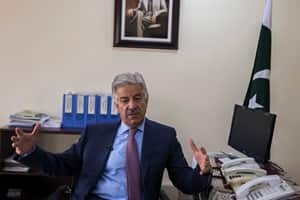 Amidst growing tension over Uri attack by Pakistani terrorists on Sunday, a video of the country’s Defence Minister Khawaja M Asif threatening to use nuclear weapon against India is doing the rounds on social media. The video shows the Pakistani defence minister telling Geo News: “If Pakistan’s security is threatened, we will not hesitate in using tactical (nuclear) weapons.” When the interviewer pointedly asked if he is suggesting the use of nuclear weapons, Asif said, “If our country is under threat, then what is to be afraid of.” Claiming that Pakistan is ahead of India in tactical capabilities, the Pakistani minister, however, said he doesn’t believe there is a possibility of war with India.

In the worst ever attack on Indian security personnel in several years, four terrorists of Pakistan-based Jaish-e-Mohammad had attacked Indian army camp in Uri sector of Jammu and Kashmir on Sunday, killing 18 Indian soldiers and injuring over 20 of them. The terrorists were also killed in the over three-hour gunbattle.

Items recovered from the terrorists have been found to be carrying Pakistani marks, according to the Indian Army. Soon after the attack, India condemned Pakistan’s dastardly act.

Union Home Minister Rajnath Singh tweeted: “I am deeply disappointed with Pakistan’s continued and direct support to terrorism and terrorist groups.” In another tweet, he said, “Pakistan is a terrorist state and it should be identified and isolated as such.”

“If pakistan’s security is threatened we will not hesitate in using tactical (nuclear) weapons” says @KhawajaMAsif pic.twitter.com/wPR0cAH40k

There are definite and conclusive indications that the perpetrators of Uri attack were highly trained, heavily armed and specially equipped.

According to reports, India is planning to make efforts get Pakistan declared as the global sponsor of terrorism.

The interview was aired a day before the terrorist attack in Uri, according to reports.

Follow us on
Latest News
Book Review| Ambedkar: A Life – Babasaheb revisited
On the shelf: Here are some of the e-books that you may find interesting
Book Review| The Dolphin and the Shark: Stories on Entrepreneurship
Contributor to climate change! Holiday ‘hot’ spots
Is there anything like good alcohol? Find out
Emirati businessman Dr Bu Abdullah alleges misuse of his name by digital currency company
IVY growth celebrates first-year anniversary with a whooping 65+ startup investments
Photos
Dazzling & Astounding! Proposed design of the to-be redeveloped Dakaniya Talav Railway Station in Rajasthan-PHOTOS
8 hours agoNovember 5, 2022
Heart-wrenching! Here is a look at Morbi and the suspension bridge that collapsed
5 days agoOctober 31, 2022
In Pictures: PM Modi in Kargil to celebrate Diwali with soldiers, says, ‘All of you have been my family for years now’
2 weeks agoOctober 24, 2022
Read More
×
Migraine myths: Here are things YOU must know
Mumbai’s Fashion Street fire incident: At least 10 shops gutted, nobody injured
Conman Sukesh Chandrasekhar has become ‘BJP’s star campaigner’, says AAP
RSS cancels Nov 6 events in TN, to appeal against HC verdict allowing route marches with riders
Congress always ignored Himachal because of low representation in Lok Sabha: Narendra Modi
ED questions Manish Sisodia’s PA in Delhi excise policy case