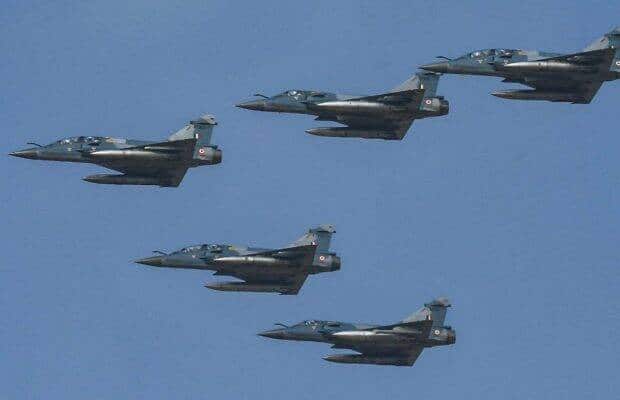 They said that there were five wheels of Mirage 2000 fighter jet on the truck and the thieves fled with one leaving behind four tyres. (Image: IAF Twitter)

In a shocking incident, unidentified miscreants stole a tyre meant for a Mirage fighter jet from a moving truck carrying military consignment. The truck was traveling to the Jodhpur airbase from Lucknow’s Bakshi-Ka-Talab airbase. An FIR has been registered in the case.

According to a report in India Today, the theft took place in Lucknow on November 27 during late-night hours at the city’s Shaheed Path. The truck was caught in a traffic jam when the miscreants carried out the theft. An FIR was lodged at the Ashiana police station of the city and an investigation is underway to nab the culprits.

The truck was carrying items like a refueller vehicle, universal trolley, aircraft main tyres, bomb trolley, seven-step ladder, CO2 trolley and aircraft nose tyres. The report claimed that the thieves were travelling in a Scorpio and taking advantage of the jam, they tore the strap used to tie the tyre and took away one.

The thieves managed to escape before the truck driver noticed the theft. Police said that an FIR was registered in the case on December 1. The police are looking into the CCTV footage as well to trace the thieves. They said that there were five wheels of Mirage 2000 fighter jet on the truck and the thieves fled with one leaving behind four tyres.