UP Elections: In rare praise for Mayawati, Amit Shah chose his words carefully

Is the BJP extending Mayawati an olive branch fearing a hung assembly? Was Shah’s show of ‘greatness’ in recognising BSP’s relevance aimed at giving Mayawati’s dying political career a new lease of life? 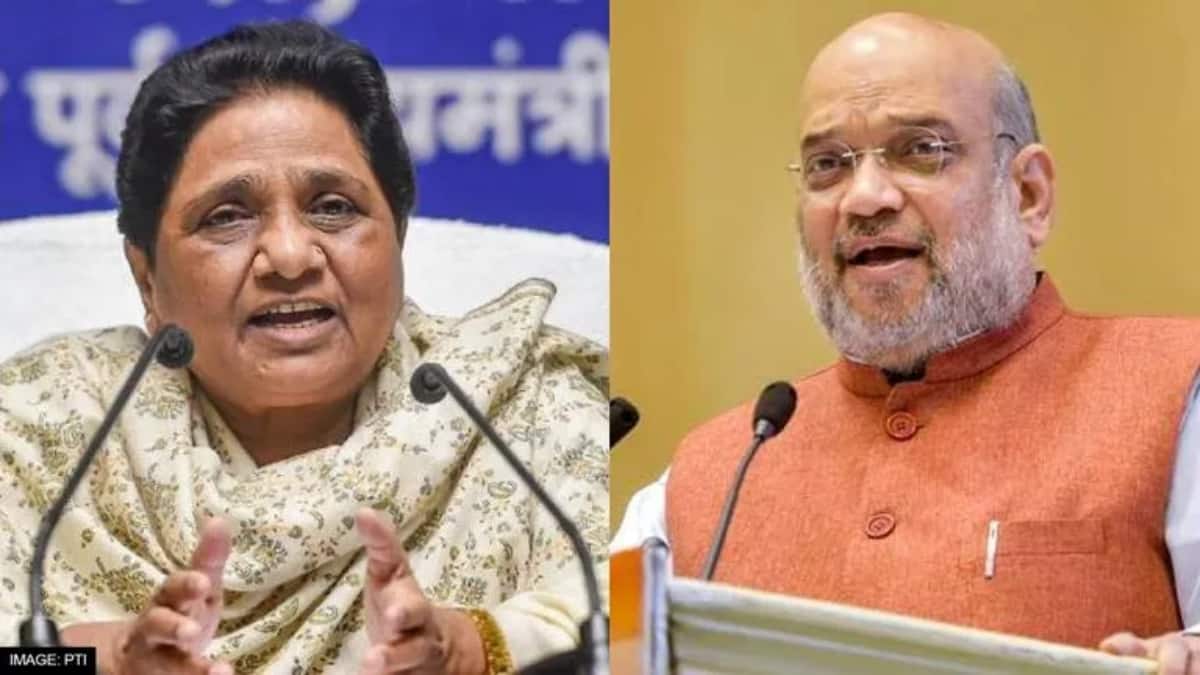 Is the BJP extending Mayawati an olive branch fearing a hung assembly? Was Shah's show of 'greatness' in recognising BSP's relevance aimed at giving Mayawati's dying political career a new lease of life?

Home minister Amit Shah’s recognition of the relevance of Mayawati’s Bahujan Samaj Party in the ongoing Uttar Pradesh elections, followed, as if by design, by the latter’s acknowledgement of the senior BJP leader’s magnanimity, surprised many political observers. Why have the Bharatiya Janata Party and the BSP, miles apart in political ideology, suddenly found common ground in an election that is largely seen as a bipolar contest between the ruling party and the Samajwadi Party? Is the BJP extending Mayawati an olive branch fearing a hung assembly? Was Shah’s show of ‘greatness’ in recognising BSP’s relevance aimed at giving Mayawati’s dying political career a new lease of life? And, if so, in strengthening Mayawati, did Shah dent the vote bank of the SP?

Elections, as they say, open up a world of possibilities but also leave much to read between the lines and draw one’s own conclusions. But before that, here’s how the measured show of bonhomie between Shah and Mayawati played out.

Asked whether the BSP taking away some of the Dalit and Muslim votes would help his party in Uttar Pradesh, Shah, in an exclusive interview to News18’s Rahul Joshi, said: “I do not know if this would be an advantage for the BJP or a loss. It depends on the seat…it is seat specific. But it’s not true that Mayawati’s relevance is over. I believe it (BSP) will get votes. I don’t know how much of it will convert into seats but it will get votes.”

Responding to Shah’s positive assessment of her campaign, Mayawati said: “It is his badappan (magnanimity) that he has acknowledged the truth.”

“But I also want to tell him – in the three phases that have taken place in UP, the BSP has not just received Dalit and Muslim votes but we are also getting upper caste and backward caste votes. I want to tell him that,” she added.

Numerous inferences have been drawn over the exchange between the two leaders, the most common among them being that the two parties may possibly be eyeing a post-poll alliance. The BJP and BSP may be poles apart ideologically, but do not exactly consider each other a political pariah. The two parties have aligned together to form a government in the past, and the BJP may not be totally averse to a repeat, if the situation so demands. Mayawati has previously joined hands with the BJP to form a coalition in 1995, 1997 and 2002.

The BSP has also forged alliances with the Samajwadi Party twice — first in 1993 for the UP Assembly polls and then for the Lok Sabha elections in 2019. The first alliance announced by veterans Kanshi Ram and Mulayam Singh Yadav stopped the BJP from claiming victory riding on the saffron wave after the 1992 Babri Masjid demolition.

The ties between the two parties, however, soured after the infamous ‘guest house’ incident of 1995. The BSP’s decision to pull out of the tottering coalition had sparked a violent reaction by SP workers, forcing Mayawati to lock herself in a room. The BJP had jumped to her rescue and propped her up as the first Dalit chief minister of the state.

Mayawati got back with SP under Akhilesh in 2019 to stop the BJP’s juggernaut but failed as the ‘Mahagathbandhan’ could only garner 15 seats while the BJP won 62 seats, and its ally Apna Dal (S) two seats.

Political commentator Suvrokamal Dutta is dismissive of the idea of a post-poll coalition between the BJP and the BSP. Instead, Shah’s remarks were an acknowledgement of the ground reality of UP – BSP has a significant support base in the Dalit and Muslim communities, he says. For the BJP, Mayawati’s decision to go it alone in these elections — like all other major players in the fray — was an advantage in itself. The reason was simple – the division of anti-BJP votes within an already fragmented opposition.

“The BSP already has a committed Dalit vote bank which is somewhere around 12-14 per cent from the sub-caste which Mayawati belongs to. Now if she gets votes from even 2-5 per cent Muslims, the damage to the Samajwadi Party is done,” Dutta said, pointing out that in a close contest on several seats, Muslim votes that the BSP manages to secure could cause irreparable damage to the SP.

“In most of the seats, there’s a triangular fight and in some of the seats, it’s a quadrilateral contest wherever Congress is giving some kind of fight, which is on around 60-70 seats. In such a situation where the winning margin is as close as 500 votes, if the Muslims candidates of the BSP are able to get 2,000-5,000 votes, then the damage for the Samajwadi Party would be colossal,” he added.

Political commentator Amitabh Tiwari is also of the view that the BSP’s competition is not with the BJP, but the Samajwadi Party, given the same vote bank of Dalits and Muslims that the two parties have been banking on. “I believe the BSP must be thinking that the BJP will these elections comfortably, so it is conserving its resources and energy,” Tiwari said.

Moreover, BSP’s choices are seen to be hurting the opposition to the advantage of the BJP on some crucial seats like Gorakhpur and Sirathu, from where Chief Minister Yogi Adityanath and Deputy CM Keshav Prasad Maurya are contesting respectively.

Farmers’ protest: BSP leaders keeping a distance from the Opposition’s charge against the BJP-led central and state governments over the now-repealed farm laws was clearly visible. Mayawati’s intervention was limited to 13 perfunctory tweets, criticising the government action against farmers.

Article 370: Mayawati had taken everyone by surprise with her stance on the abrogation of Article 370, which conferred special status to Jammu and Kashmir, in August 2019. In a series of tweets, she said that even Bhimrao Ambedkar was against Article 370 as he supported the unity and integrity of India.

Triple Talaq Bill: In July 2019, Mayawati extended an indirect support to the BJP by abstaining from voting on the Triple Talaq bill in the Parliament. Notably, BSP leader Danish Ali – who opined differently from the party on Triple Talaq and Article 370 – was removed as leader of the party in Lok Sabha.

Rajya Sabha Elections: In November 2020, elections were held for ten Rajya Sabha seats from Uttar Pradesh. Given the NDA’s strength of 305 MLAs and a few others belonging to its ally Apna Dal, the BJP could have easily won nine seats. However, the BJP put up only eight candidates, paving the way for BSP’s Ram Ji Gautam to win one seat. After these elections, Mayawati said that she was even willing to go with the BJP to defeat the Samajwadi Party’s candidates in the state legislative council elections.

Apart from these instances, Mayawati and her party’s political inaction during the high-decibel poll campaigning by other parties has also been a talking point in the state’s political circles. Many see her absence and lack of aggression against the BJP as a bid to save herself from prosecution in cases of corruption and disproportionate assets.