Against the backdrop of farmers’ protest, the alliance is expected to give a tough fight to the BJP in western Uttar Pradesh. 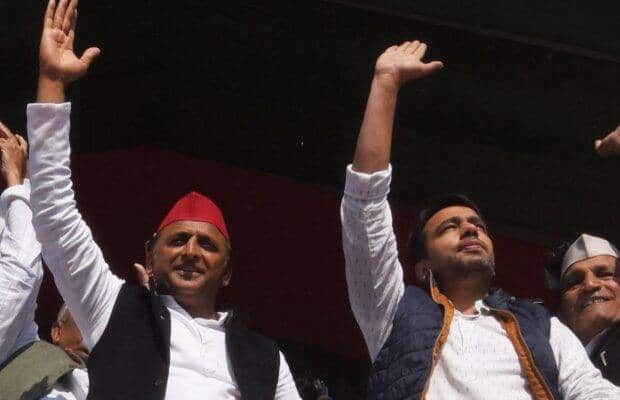 Against the backdrop of farmers' protest, the alliance is expected to give a tough fight to the BJP in western Uttar Pradesh.

The Samajwadi Party and Rashtriya Lok Dal on Tuesday formally announced their alliance for the 2022 Uttar Pradesh Assembly polls at a rally in Meerut and exuded confidence that the BJP will be “wiped out” from the state.

While SP chief Akhilesh Yadav promised to provide due rights to the farmers, RLD president Jayant Chaudhary said the first work after coming to power would be to build a memorial of those who died during the protest against the now-repealed Central farm laws.

Against the backdrop of farmers’ protest, the alliance is expected to give a tough fight to the BJP in western Uttar Pradesh which had won 109 of the 136 Assembly seats in the region during the last Assembly polls.

Yadav claimed that the BJP did not have any issue to highlight and accused the BJP members of creating fissures in society. “SP and RLD workers, on the other hand, are there to strengthen brotherhood,” he said.

The Samajwadi Party chief claimed that under the BJP’s rule, people had to stand in queues for fertilisers and for medicine, oxygen and beds during the pandemic. They also had to stand in line during demonetisation, he said.

“This time, people will queue up to oust the BJP from power. The BJP will be wiped out from the state this time. BJP will be driven out (‘khadeda’) from western Uttar Pradesh and in the eastern part, the party’s sun would set forever,” Yadav said.

He also announced to provide cheap electricity to farmers and repaying their dues as he urged people to vote for the alliance to save the legacy of former prime minister Chaudhary Charan Singh and RLD founder Ajit Singh.

The timing of Yadav and Jayant Chaudhary’s address at the Meerut rally was close to Prime Minister Narendra Modi’s speech at a public meeting in Gorakhpur where he dedicated to the country three megaprojects, including an AIIMS and a fertiliser plant.

At the rally, Yadav paid homage to Bhimrao Ambedkar, Ram Manohar Lohia and farmers leader Mahendra Singh Tikait and highlighted their contribution to making an egalitarian society. “There will be a revolution by farmers in 2022, there will be a change in 2022,” he stressed, adding that there should be a decision on the legal guarantee of minimum support price for farmers.

Alleging the BJP does not want to take a decision in favour of farmers, the Samajwadi Party chief said, “Our alliance will ensure due rights to the farmers. BJP minister and his supporters crushed farmers under their vehicle.”

He was referring to the Lakhimpur Kheri incident on October 3 when four farmers were allegedly mowed down by an SUV. In the ensuing violence, four people, including a journalist and two BJP workers, were also killed. Over a dozen people, including Union Minister of State for Home Ajay Mishra’s son Ashish Mishra, have been arrested in the case.

He alleged the claims of development by the BJP were “farce, like the fake horse used in film sets, which appears to be running but remains still at one place”.

“The BJP government at the Centre is on a selling spree. They sold airports, aeroplanes, railway stations. They had promised that those wearing slippers will be able to travel on aeroplanes. Now, it is difficult for a common man to even ride a bike,” Yadav said.

While announcing the alliance at the rally, RLD chief Jayant Chaudhary said, “Akhilesh ji and I are together and I am making an announcement in this regard.” “The first work of our double-engine government will be to build a memorial for farmers, who died during the fam laws protest,” he said.

Hailing the farmers’ agitation, Chaudhary said, “I appreciate farmers for winning a big battle and forcing (Prime Minister Narendra) Modiji, probably for the first time, to bow before them.”

Chaudhary slammed the Yogi Adityanath government for the recent leak of a competitive examination question paper and subsequent cancellation of the test and claimed that because of such incidents the youngsters were not getting jobs and were forced to migrate to other places for work.

“The BJP talks of hatred. Our ‘babaji’ (Chief Minister Yogi Adityanath) starts with Aurangzeb and ends with the Kairana exodus,” the RLD chief said.

Chaudhary was referring to the BJP’s during the last assembly elections that many Hindu families had migrated from Kairana town in fear of criminals. The claim has been contested by many political parties.

“People have understood the politics of hate. This time, they will not fall into the trap of hatred. The BJP will get a befitting reply from the people in the Assembly polls,” he said. Targeting Adityanth, the RLD leader said, “Babaji gets angry very fast. You will never see him smiling. He smiles only when he is with calves. I ask people to free him (from his chief ministerial duties) so that he can play with his calves round the clock. He cannot handle government files.”