Priyanka Gandhi said that the party will reserve 8 lakh jobs for women out of the 20 lakh it promised. 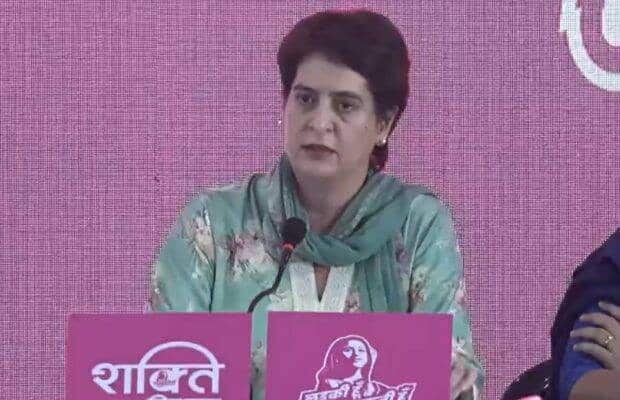 Priyanka Gandhi said that the party wishes to increase the 40 per cent seat reservation it announced for women candidates to 50 per cent in future.

UP Elections 2022: The Congress party today released its manifesto for the Uttar Pradesh assembly elections. Releasing the party manifesto, Congress general secretary Priyanka Gandhi Vadra said that it was Congress that gave the country its first woman Prime Minister and first woman Chief Minister as Sucheta Kripalani. The party has been banking on women voters to sail through in the elections in the state where opinion polls have painted a grim picture for the Congress. “This manifesto is for women. We want to empower them and to do that, we will have to make an environment where they can express themselves freely. They should have freedom of choice, freedom of participation in politics, and to ensure their participation in society so that they come out of oppression,” said Priyanka.

She said that the party has divided their plan to empower women into six categories – self-respect, self-reliance, education, respect, security and health.

Priyanka Gandhi said that the party wishes to increase the 40 per cent seat reservation it announced for women candidates to 50 per cent in future. She said that the party will reserve 8 lakh jobs for women out of the 20 lakh it promised. She said that businesses employing 50 per cent of women staff will get relief in taxes and the businesses run by women will get cheaper loans and tax refunds. “Safe and modern hostels will be made for working women across 25 cities in the state. Rs 10,000 minimum honorarium will be given to Asha and Anganwadi workers. Loan to self-help groups at 4 per cent interest, priority to women in MNREGA, 50 per cent PDS shops will be run and operated by women,” she said.

She added that girl students of 10+2 will be given smartphones, those pursuing graduation will get a scooty, 75 new skill schools across districts will be opened along with women-run evening schools.

“Competence, strength and determination are the innate qualities of women. Women are the epitome of courage, compassion and hope. For the true empowerment of women, it is necessary to create such an environment for them in which their expression is free from bondage and unlimited space. This is the core spirit of our women’s manifesto,” she said.

Other promises that featured in Congress manifest include an income-wise scholarship to girls in secondary schools, free travel for women in government buses, three free LPG cylinders, Rs 1000 monthly pension to widow and elderly women, Mahila chaupal in every gram panchayat, 10 residential sports university, an FD for every baby girl, and free internet to poor households.