The police informed that the case was registered on a complaint from the rape survivor’s uncle Mahesh Singh who is lodged in the Raebareli jail in a separate case. 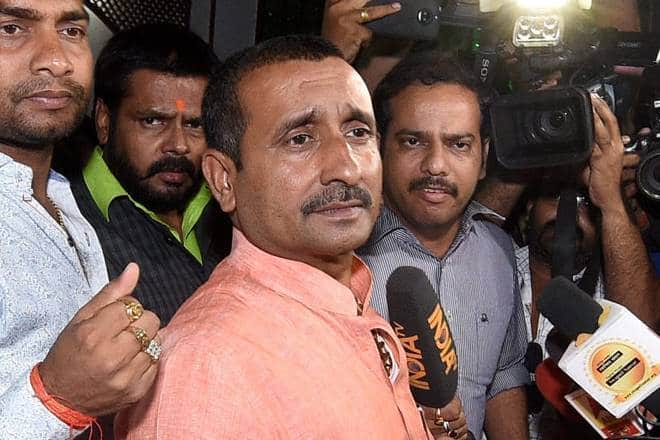 Unnao accident: The Uttar Pradesh Police on Monday slapped murder charge on BJP MLA Kuldeep Singh Sengar after Unnao rape survivor was critically injured in an accident on Sunday. Sengar is the prime accused in the Unnao rape case and is currently in jail. The victim’s mother claimed that the accident was a conspiracy to kill her family members. They were hit by an over-speeding truck with the blackened number plate. The police, however, claims that the number has been retrieved and the driver has been arrested.

The opposition leaders slammed the ruling BJP and asked for a thorough probe into the accident. Following the uproar, the police filed a case against 10 persons. According to PTI, an FIR has been registered under the Indian Penal Code’s sections 302 (murder), 307 (attempt to murder), 506 (criminal intimidation), 120B (criminal conspiracy) against 10 named persons including the BJP MLA.

The police have informed that the case was registered on a complaint from the rape survivor’s uncle Mahesh Singh who is lodged in the Raebareli jail in a separate case. The news agency reports that Mahesh Singh has blamed the BJP MLA for the accident. “I am sure that the car was hit for killing all of them by the BJP MLA and his men,” Singh has reportedly said in his complaint.

Earlier, Uttar Pradesh DGP OP Singh said that the state government was ready for a CBI probe into the accident if a request is made. He, however, said that the truck was over-speeding and it was raining also. “Prima facie, appears to be an accident, but a detailed unbiased probe is on in the matter,” he added. The accident has shocked the nation with many now asking for an SIT investigation into the case.

Delhi CM Arvind Kejriwal said that systematic attempts to eliminate the Unnao rape victim and her family appeared to be a pre-planned conspiracy and a mockery of rule of law. “How can any civilised society allow such state-sponsored barbarism?” he said in a tweet. West Bengal Chief Minister Mamata Banerjee said that the Unnao incident is very unfortunate and Prime Minister Modi should take action. “A high-level inquiry committee should be formed to look into it,” she added.

Congress general secretary Priyanka Gandhi said that the BJP should sack its MLA. “What is the BJP waiting for? Why has this man not been expelled from their party even when his name is in the latest FIR in the Unnao Rape Case?” she said in a tweet.