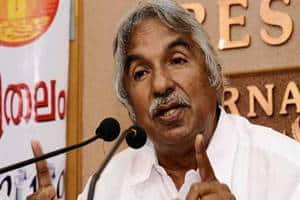 Oommen Chandy had expressed his reservation in taking over as the Leader of the Opposition and also the Chairman of UDF. (PTI)

Congress-led UDF Opposition in Kerala today decided to make former chief minister Oommen Chandy the front chairman, but he declined to accept it.

UDF, at its meeting held here, decided to appoint Chandy as the front chairman, but he refused to accept the post, Leader of the Opposition in the Assembly Ramesh Chennithala told reporters.

The experience and knowledge of Chandy was necessary for the front and the decision of UDF would be conveyed to AICC, he said, adding “the final decision on the matter has been left to AICC”.

After a preliminary evaluation of the outcome of the May 16 assembly polls, UDF was of the view that failure to check the allegations raised by Left combine against the Chandy government was one of the reasons for its defeat, he said.

Earlier, Chandy had expressed his reservation in taking over as the Leader of the Opposition and also the Chairman of UDF.

Chennithala said “communal polarisation” by BJP and CPI-M and the failure to make people aware of the UDF government’s achievements also contributed to front’s poor performance.

On the Mullaperiyar dam issue, UDF wanted the government to convene an all-party meeting to discuss the matter against the backdrop of confusion triggered by the statement of Chief Minister Pinarayi Vijayan on the issue, he said.

He also demanded that the government stop the transfer of employees in “violation of rules”.
Taking a dig at the LDF government, Chennithala, former Home Minister, said LDF which stated that it would catch the culprit in the brutal rape and murder of a Dalit woman law student in Perumbavur within 48 hours after coming to power had not yet made any arrest.

“I would like to know from the LDF government its present stand on the case, in which no one has been arrested so far,” he said.

The Dalit woman was raped and murdered in her roadside home on April 27 and it was raised in a big way by both LDF and BJP during the campaign for the assembly elections.