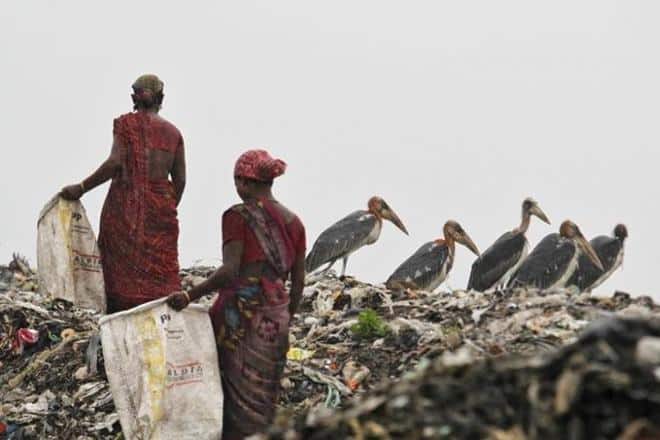 The MoU was signed in the presence of the Ambassador of France to India, Alexander Ziegler. (Reuters)

A Delhi-based green body, a French waste company and a Geneva-based innovation foundation have joined hands to further strengthen India’s waste management capabilities. Coinciding with the Earth Day today, the Energy and Resources Institute (TERI), the Innovative Finance Foundation (IFF) and 3WAYSTE company signed an MoU to collaborate on the rollout of a breakthrough technology for municipal solid waste management. The MoU was signed in the presence of the Ambassador of France to India, Alexander Ziegler. In his keynote address, he said, “Going sustainable and reducing human impact on environment are tremendous challenges and France and India are committed to meeting them.”

“We need political leadership, but also innovation, technologies and a strong involvement from the private sector and the civil society. I am delighted to support this fruitful Indo-French initiative,” he said. He also said, the world needs to cut on carbon emission level, and combating sold waste is one of the ways. 3WAYSTE president Fabien Charreyre said, “We are excited to enter India and hopefully and the intent of this partnership is to transfer technologies to the country.” A senior official of the France-based firm said, the idea is to open up a few m waste processing plants in the country, possibly Bengaluru would be the first city. “Pune and Kota have also shown interest in setting up such plants,” he said.

The technology is capable of treating all household waste, including unsegregated waste, while converting more than 90 per cent of it into residue fuel to produce clean energy, pure compost for agriculture and valuable raw materials, the TERI said. Ajay Mathur, Director General, TERI said, “Waste segregation at source has been major challenge since the passage of municipal solid waste management rules in 2000 and again in 2016.” “The process introduced by 3WAYSTE and TERI proposes to work mixed waste while recovering 90 per cent of resources from it, including for clean energy and quality compost,” he added.

Follow us on
Latest News
Looking to grow share of own channel business to 67%
Delhi’s air quality set to worsen, AQI Commission intensifies steps to restrict pollution
Hero MotoCorp Q2 profit drops 10 percent, plans multiple launches over next few quarters
Rs 4.25 lakh in fines for GRAP violations in Noida
PhonePe sets up 10 lakh SmartSpeakers for merchants, records over 100 cr transactions across India
Majority of employers in services sector keen to hire in Q3: Report
WhatsApp Communities launched for everyone, here’s what this feature does
Photos
Heart-wrenching! Here is a look at Morbi and the suspension bridge that collapsed
3 days agoOctober 31, 2022
In Pictures: PM Modi in Kargil to celebrate Diwali with soldiers, says, ‘All of you have been my family for years now’
1 week agoOctober 24, 2022
In Pictures: PM Modi inaugurates Deepotsav in Ayodhya; World record set by lighting of over 15 lakh diyas
1 week agoOctober 24, 2022
Read More
×
‘Arrest me if I have committed a crime, why question’: CM Hemant Soren after skipping ED summons
Don’t spare corrupt, don’t be defensive: PM Modi to CVC and anti-corruption agencies
‘Is negligence too an act of God?’ Congress sharpens attack against BJP on Morbi bridge collapse
Gujarat Elections 2022: BJP chief Nadda says party will form govt with big majority
Gujarat elections 2022: Will saffron sweep Gujarat again? Modi to Morbi – 10 factors that could make or break BJP’s chances
Neither govt nor people serious about tackling monstrous problem: Varun Gandhi on worsening air quality in Delhi