Telangana Election 2018 Highlights: Over 67 per cent turnout recorded in Telangana

Telangana Election 2018 Highlights: The Assembly polls in Telangana were originally scheduled to be held simultaneously with the Lok Sabha elections next year

Telangana Election 2018 Highlights: Polling in Telangana concluded with over 67 per cent recorded turnout on Friday. In the last assembly elections, the voter turnout was 69.5 per cent. Immediately after voting ended in the state, multiple media houses put out exit poll numbers for Telangana. According to the exit polls, ruling Telangana Rashtra Samithi is projected to retain power in the state. If it happens, TRS Chief K Chandrasekhar Rao will become the chief minister for the second term.

To counter the TRS, Rahul Gandhi-led Congress had joined hands with the Telugu Desam Party, the Telangana Jana Samiti and the Communist Party of India. The TRS and BJP had gone to the polls on their own. The polls in the state were originally scheduled to be held simultaneously with the Lok Sabha elections next year, but the House was dissolved prematurely on September 6 as per a recommendation by the state cabinet.

Speaking on Jwala Gutta's name missing case, Telangana Chief Electoral Officer Rajat Kumar said that he has asked for a final report from the Electoral Registration Officer. Gutta's name was missing from the final voter list. 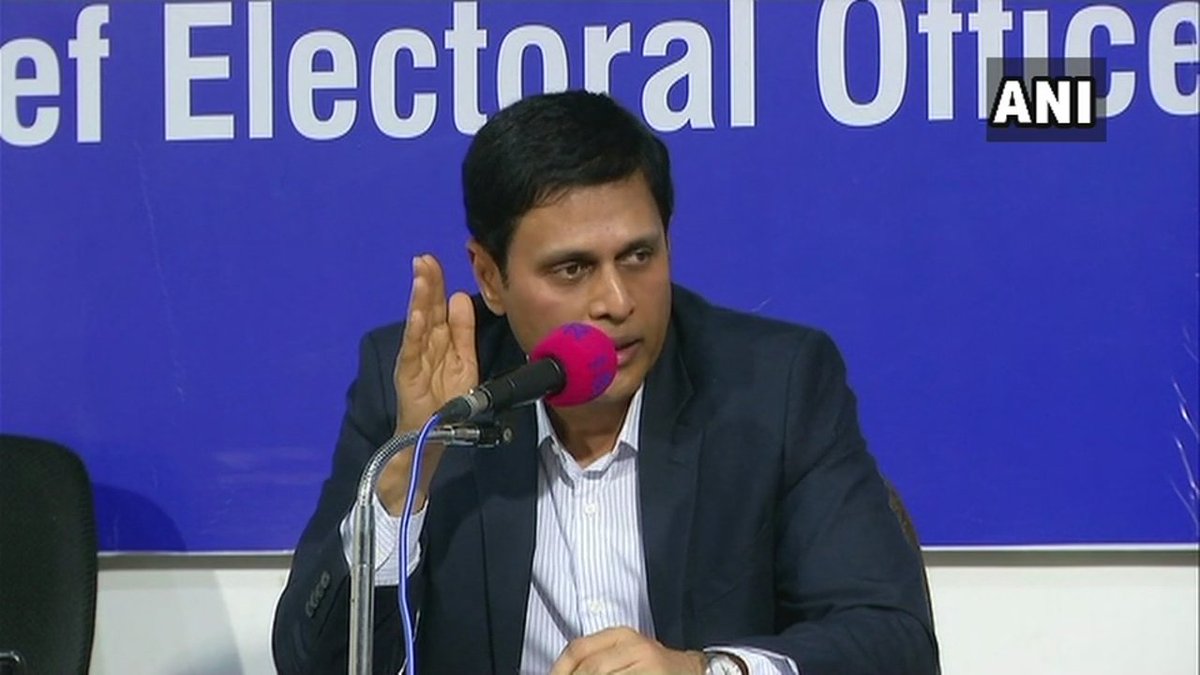 In Telangana, voting in Naxal-affected constituencies was passed off peacefully. Speaking to PTI, state police said: "The polling process in 13 constituencies out of the 119 assembly segments identified sensitive to Left-wing extremism was conducted in a peaceful manner." The police also arrested a cadre of banned CPI-Maoists in Bhadradri Kothagudem District and seized two pipe bombs.

Voting still underway at some polling stations in Telangana 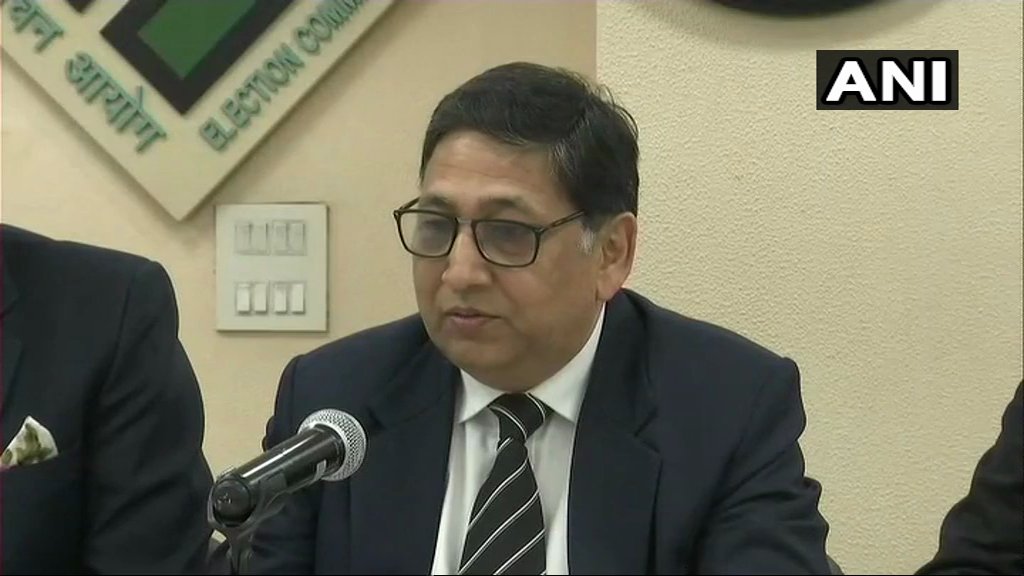 BJP leader Mukhtar Abbas Naqvi today approached the Election Commission demanding action against against Congress President Rahul Gandhi for influencing voters. The BJP alleged that Gandhi influenced voters through paid news under the garb of his interview in a Hyderabad newspaper on 6 December. 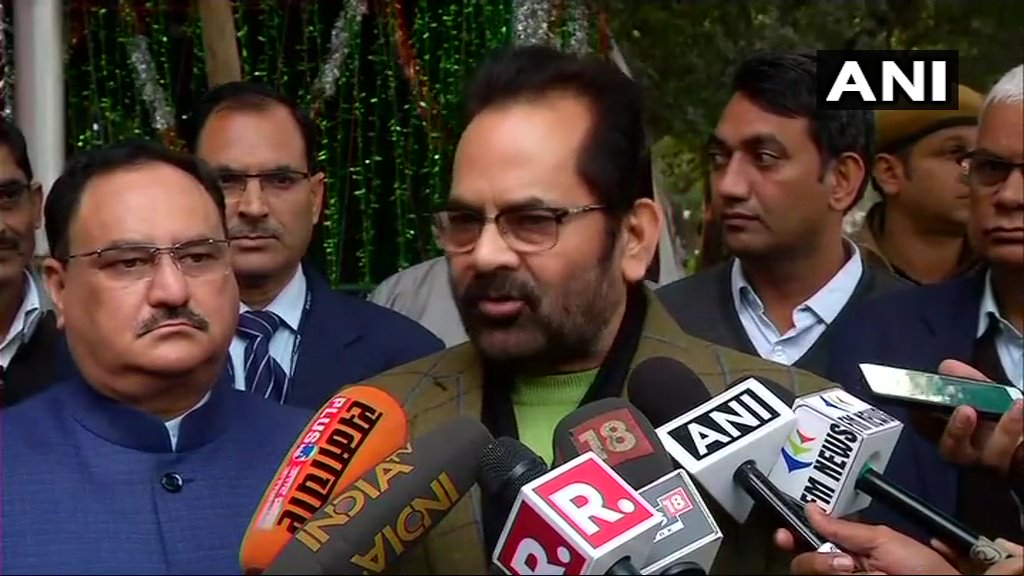 Giving an update on ongoing voting in Telangana, Chief Electoral Officer Rajat Kumar said: "Polling commenced at 7 am, though at some polling centres there was a delay of 10 to 15 minutes. In one or two cases EVMs needed to be replaced. We have replaced 22 ballot units, 19 control units and 42 VVPATS." He also said that the EC has received 30 complaints relating to violation of Model Code of Conduct.

Telangana chief minister had dissolved the assembly in advance hoping to win the state in early elections. However, the Congress tied up with TDP to take on KCR in the state. Now, the main contest in Telangana is between ruling TRS and People's Front. Congress demands action over attack on its candidate

Congress has written to the state chief electoral officer over an attack on its candidate. It requested immediate action people responsible for the assault.

Congress party workers, be vigilant after polls close today. In MP, EVM's behaved strangely after polling:Some stole a 🚌 and vanished for 2 days! Others slipped away & were found drinking in a hotel. In Modi’s India, the EVMs have mysterious powers 😎Stay alert! pic.twitter.com/DViNl8fdPC

Till 3 pm, over 56 per cent voters cast their votes in Telangana. The state is voting to elect its new 11--member assembly. In the last elections, total turnout was 69 per cent. TRS had won 63 of 119 seats while the Congress came at distant second with 21 seats. However, opinion polls have predicted better number for the Congress this time. According to C voter, the Congress is projected to win 64 of 119 seats. The opinion polls predict 42 seats for ruling TRS. Telangana CM KCR had dissolved the assembly hoping to sweep the elections but an unexpected alliance between Congress, TDP and others changed the game for the TRS. Caretaker Minister KT Rama Rao cast his vote at a polling station in Hyderabad. He is fighting from Sircilla. In the last elections, KTR had won from the seat by 53,000 votes. He is IT minister in KCR's cabinet. 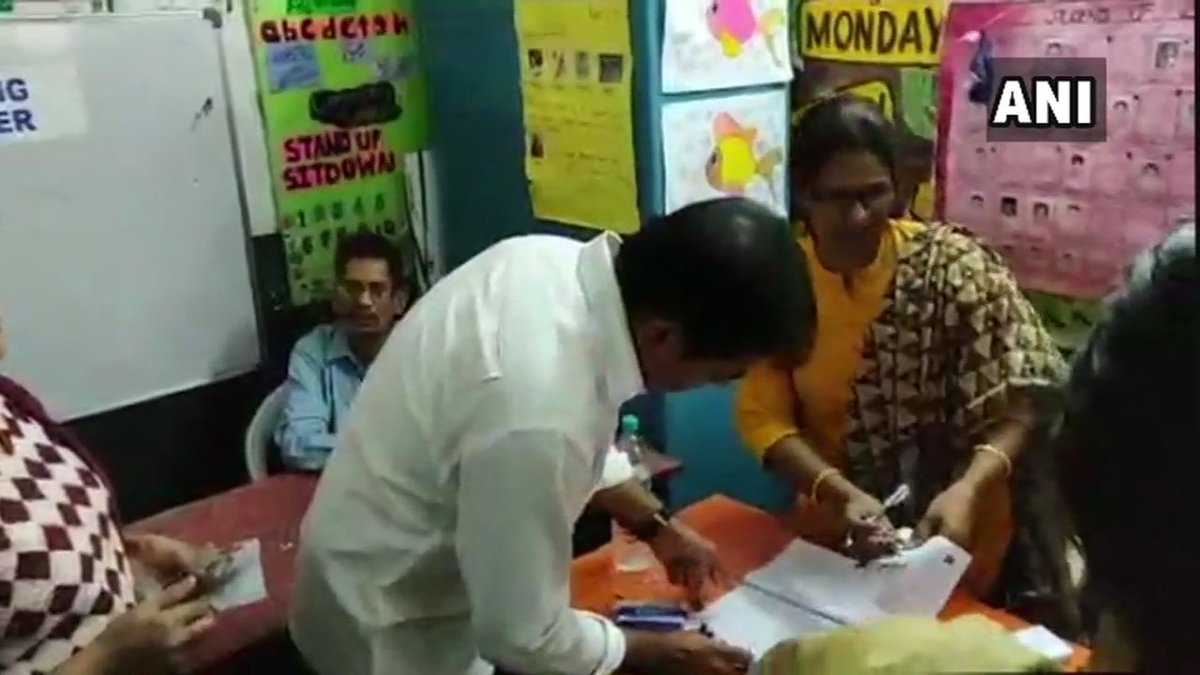 Jwala Gutta on Friday said that she checked her name online 2-3 weeks ago. 'My mother's and my names were there, my father's an my sister's were missing. Today we went to cast vote but my name was also missing. I don't understand how's my name missing. I've been living here for 12 years,' Jwala Gutta said while speaking to ANI. 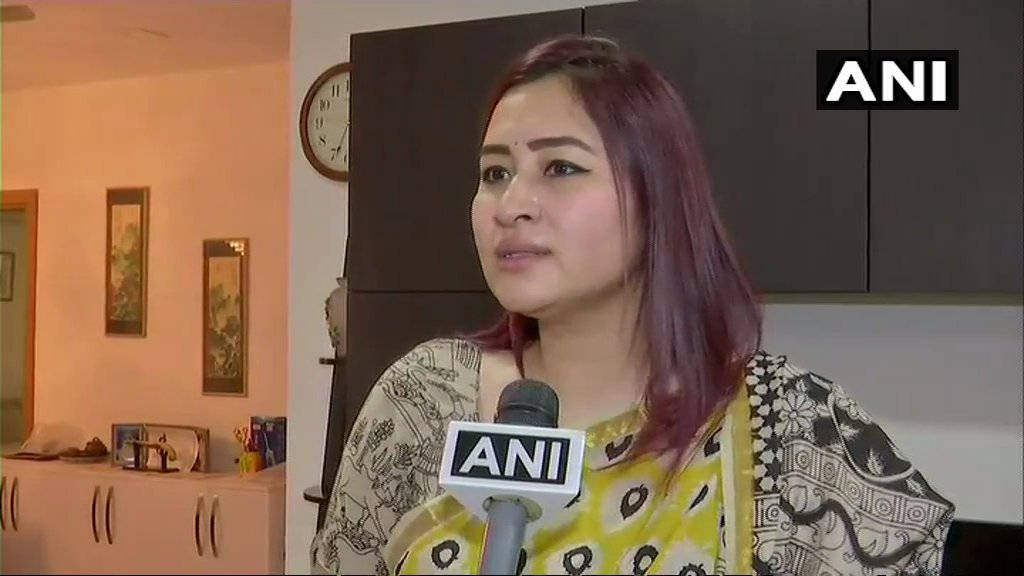 Caretaker Chief Minister of Telangana KCR cast his vote at a polling station in Siddipet. 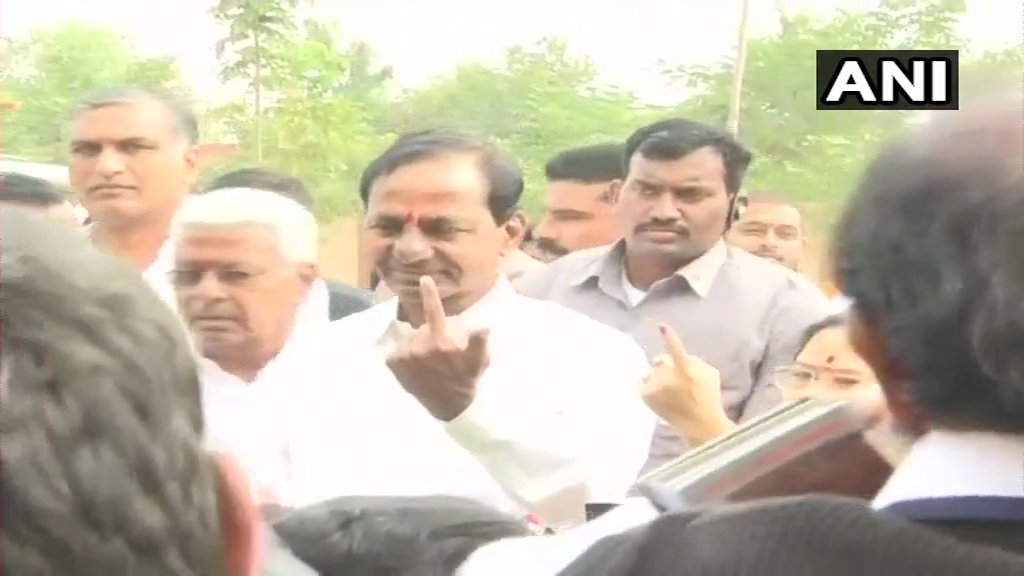 Congress candidate from Mahbubnagar Challa Vamshi Chand Reddy was allegedly attacked by some unknown miscreants. He was later shifted to Nizam's Institute of Medical Sciences Hospital in Hyderabad. He is out of danger now, ANI reports. 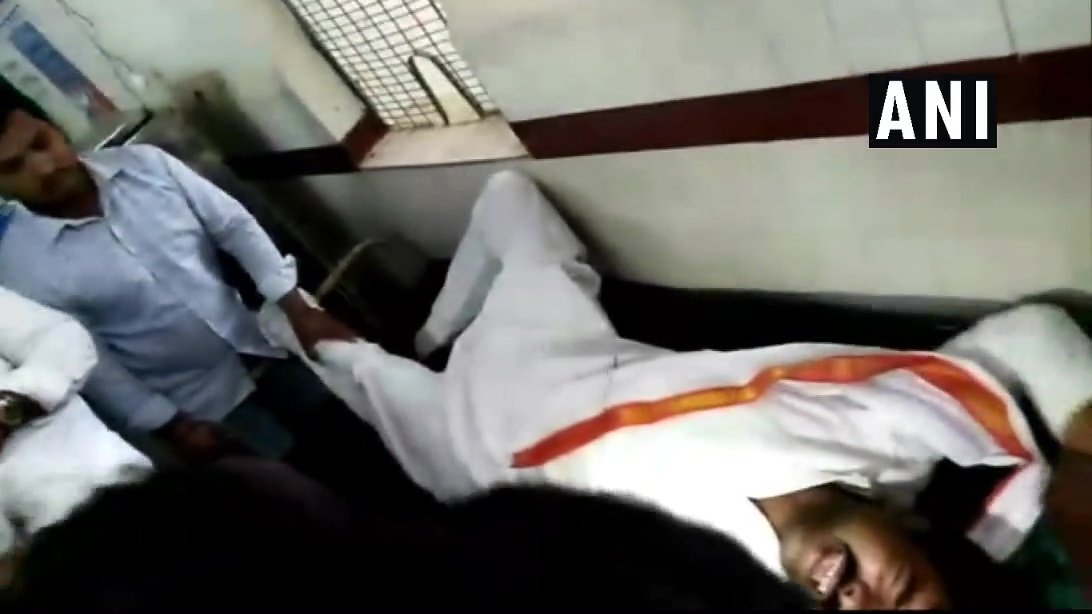 As per the latest trend, voter turnout recorded till 1 pm during elangana Elections 2018 is 49.15 per cent.

AIMIM president Asaduddin Owaisi Friday exuded confidence that his party would be successful in Telangana Assembly polls. "I am hopeful. I am fully confident that we will be successful in every seat. I hope people of Hyderabad, people of Telangana take this little difficulty, go out of homes and use their vote," he told reporters. The AIMIM has fielded candidates in eight assembly segments in Hyderabad out of the total 119 seats in the state. It is supporting TRS in other segments. Owaisi cast his vote in Rajendranagar Assembly segment in Hyderabad on Friday.

Ace tennis start Sania Mirza has cast her vote at Film Nagar Cultural Center in Hyderabad. Voter turnout recorded till 11.00 am is 23.4 per cent.

TRS MP K Kavitha stands in a queue to cast her vote at polling booth no. 177 in Pothangal, Nizamabad.

The Congress has stitched together the 'Prajakutami' (People's Front) along with the Telugu Desam Party (TDP), the Telangana Jana Samiti (TJS) and the Communist Party of India (CPI), to take on the ruling TRS, which is led by caretaker Chief Minister K Chandrasekhar Rao (KCR).

Nearly nine per cent of over 2.80 crore voters of Telangana exercised their franchise during the first two hours of polling on Friday. Telangana leaders Kadiyam Srihari, Harihs Rao, Pocharama Srinivas Reddy, Jupally Krishna Rao and Jagadish Reddy were among those who cast their vote. Former Union Minister Chiranjeevi and cine actors Nagarjuna cast their vote in Jubilee Hills in the city.

Telangana Assembly elections Live Updates: Over 10 per cent voter turnout recorded till 9.30 am

As per the latest reports, voter turnout recorded till 9.30 am in Telangana is 10.15 per cent.

Actor Chiranjeevi stands in a queue to cast his vote at polling booth no. 148 in Jubilee Hills in Hyderabad.

In his audio message to the party workers in Telangana, Gandhi said the Congress party realised the "dream of Telangana" for the state's people. "That dream of Telangana has been betrayed for the last five years. KCR (Chief Minister K Chandrasekhar Rao) ji did not do what he had to. Now your time is coming. Stand at the polling booth and put all your effort to make the Congress win," he said.

A total of 8.97% voter turnout recorded till 9 AM, as per reports

State Chief Electoral Officer (CEO) Rajat Kumar Thursday said as many as 446 flying squads were in operation in the state to swing into action if any irregularity was reported and 448 static surveillance teams would also keep a watch on the situation. They would wait in the wings to take action, he said. Besides, 224 video-surveillance teams and 133 video-viewing teams were pressed into service. There were 126 assistant expenditure observers and 123 accounting teams.

Huge sums of unaccounted cash and illegal liquor and other goods were seized since the Model Code of Conduct came into effect on September 27. As per the last count, the total seizures stood at nearly Rs 135 crore including unaccounted cash, illegal liquor and other goods, Rajat Kumar said adding that the total seizures was 90 per cent more than that of during 2014 polls.

The time for change is now, the time to fight is now. Congress workers of Telangana, tomorrow we must put our heart & soul to bring a govt for the people: Congress President Rahul Gandhi

Voting is not only our right, it's our power. With our vote, comes our power to choose, to question, to speak up and to support each other. Exercise your right, Telangana. Go out and vote! #TelanganaElections2018 pic.twitter.com/Tcr6scB8e6

Polling is yet to begin at the polling station at GHMC Indoor Stadium, Amberpet due to a technical problem. Voting in the state began at 7 am today.

The Assembly polls in Telangana were originally scheduled to be held simultaneously with the Lok Sabha elections next year, but the House was dissolved prematurely on September 6 as per a recommendation by the state cabinet. Rahul Gandhi said Wednesday the Congress-led alliance is confident of winning the elections "hands-down" and claimed that the KCR was showing "signs of nervousness and insecurity" in recent campaign rallies he addressed. The BJP, which won five seats in alliance with the TDP in the last elections in 2014, said it ensured that there is a triangular fight in Telangana this time.

Over 2.80 crore electorate are eligible to exercise their franchise in the state, which has a total of 32,815 polling stations. More than 1.5o lakh polling officials, including reserve staff, are on duty. Additional DG ( Law and order) Jitender Thursday told PTI that about one lakh security personnel, including 25,000 central paramilitary forces and 20,000 from other states, are engaged in poll duties. A senior police official said security was beefed up at bordering areas which were identified as Left Wing Extremist-affected regions.

Telangana Election 2018 Highlights: Telangana assembly election Results will be out on December 11. It will be interesting to be seen if TRS president and Caretaker Chief Minister K Chandrasekhar Rao's gamble to opt for early elections pays off. For the first time, the Election Commission is using Voters Verifiable Paper Audit Trail (VVPAT) in Telangana. As many as 1821 candidates, including a transgender, are in fray. Counting of votes would be taken up on December 11. Huge sums of unaccounted cash and illegal liquor and other goods were seized since the Model Code of Conduct came into effect on September 27.