Speaking at the rally in Bengaluru on Sunday, Surya said that only “puncture-wallahs and illiterates” were protesting against the CAA and the proposed National Register of Citizens (NRC). 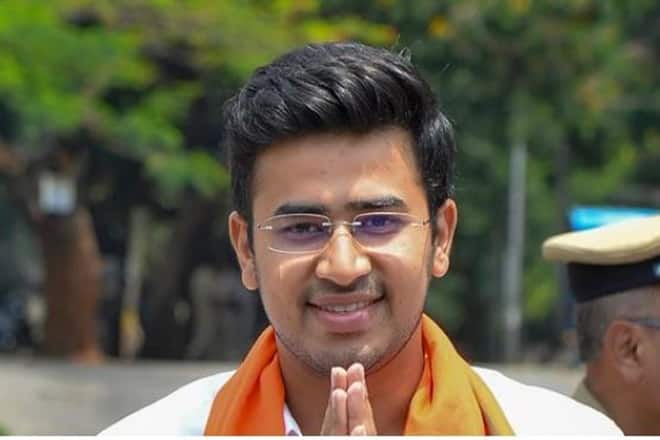 Tejasvi Surya CAA remark: Tejasvi Surya, the Bharatiya Janata Party MP from Bangalore South constituency, has drawn criticism over his controversial statement during a rally in support of the Citizenship (Amendment) Act. Speaking at the rally in Bengaluru on Sunday, Surya said that only “puncture-wallahs and illiterates” were protesting against the CAA and the proposed National Register of Citizens (NRC).

“People of Bengaluru’s IT and BT sector, those contributing to the nation’s economy, like lawyers, bank employees, and ordinary citizens — including auto-rickshaw drivers — have gathered here today. Only the uneducated, illiterate, and puncture-wallahs are against the CAA,” the young MP is heard saying in a video clip that has gone viral.

The BJP leader goes on to add, “We are creating a new India, a $5-trillion economy. Your namby-pamby secularism will not work here anymore.”

The remarks by the 29-year-old MP, a lawyer by profession, attracted cheers from the crowd, however, the Opposition slammed Surya and described his speech as ‘unbecoming of a parliamentarian’. Indian Youth Congress leader Srivatsa Y B, who shared the video of Surya’s speech on Twitter, said,”Want to know what privilege sounds like? MP @Tejasvi_Surya, who hails from a rich political family, mocks CAA protestors as ILLITERATES and PUNCTURE WALAS. Are the poor not supposed to protest now? Such crass elitism is unbecoming of a parliamentarian.”

Are the poor not supposed to protest now?

Such crass elitism is unbecoming of a parliamentarianpic.twitter.com/Ijn3vuYLGB

The PM always brags about his humble chaiwala background and his MP’s mock protesting citizens as illiterates & Puncture walas.

23 crores Indians go to bed on an empty stomach daily. Imagine if they all rise up??

Former Karnataka Chief Minister and senior Congress leader Siddaramaiah too slammed Surya and said that the statements “reflect his mental status” and the way he views poor and downtrodden people.

“He (Surya) is an RSS man, grown in ABVP. He represents the system that took away the rights of Dalits, Shudras and backward communities. This is what he represents,” The Indian Express quoted Siddaramaiah, as saying in Mangaluru.

On Tuesday, Surya sought to clear the air over his statement. Speaking to NDTV, Surya said that the use of “one metaphorical sentence” in his speech “should not be taken seriously”. Surya said his entire speech of 29 minutes focussed on maintaining communal harmony and nowhere did he mean that the poor and the uneducated do not have rights. Surya, however, questioned those protesting over their reasons for the agitation. “I have only asked for legitimate reasons as to how the CAA affects any Indian Muslim or a Hindu.”

Speaking in Lok Sabha in July this year, Surya had demanded the Centre to extend NRC in Karnataka also while claiming that over 40,000 illegal Bangladeshi Muslim immigrants were living across the state. Surya had described them as a “threat to security of the state”.