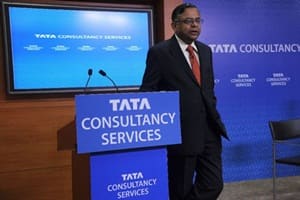 TCS delivered c/c revenue growth of 2.1%, in line with our estimate. Core markets performed well. US grew 2.4% q-o-q and Continental Europe by 3.6%.

Below are 10 key takeaways from TCS results:

Dividend: TCS also announced a final dividend of Rs 27 per equity share, or 2,700 per cent, on face value of Rs 1 for the financial year ended March 31, 2016. The dividend will be paid on the seventh day from the conclusion of the Annual General Meeting (AGM).

Innovation and Intellectual Property: As on March 31, 2016, the company has applied for 2,842 patents, including 260 applied during the quarter. Till date the company has been granted 341 patents.

Digital Revenue: In FY 16, digital revenue grew 52.2 per cent due to faster adoption of digital solutions as customers moved to embrace a holistic digital transformation of the enterprise.