Talgo is set to resume its trials on the Delhi-Mumbai Rajdhani route from September 7. 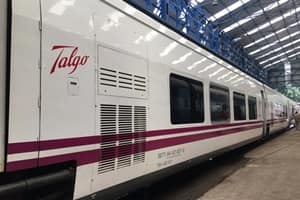 Talgo's most awaited run will take place on September 10, when claims less than 12 hours train journey between Delhi and Mumbai will be tested.

After a gap of almost a month, Talgo is set to resume its speed trials on the Delhi-Mumbai Rajdhani route from September 7. On September 7, the Talgo train, pulled by an Indian Railways WAP5 electric locomotive will depart from New Delhi Railway station at 14:45 hours and is expected to reach Mumbai Central on September 8 morning at 02:57 hours. At a maximum permissible speed of 140 kmph and a cant deficiency of 100 mm, Talgo says that the journey will take 12 hours and 12 minutes. Cant deficiency deals with the train’s speed on curves. This will be the second last trial of the train.

While all trials of the Talgo train have created a buzz, its most awaited run will take place on September 10 when the Spanish company’s claims of completing a journey between the two metro cities in less than 12 hours will be tested. The train will depart at 14:45 hours on September 10 and is scheduled to reach Mumbai at 02:29 hours. This trial run will be conducted at a maximum permissible speed of 150 kmph and a cant deficiency of 100 mm. According to Talgo, the total journey time with these parameters would be 11 hours and 44 minutes. Presently, the Rajdhani Express takes almost 16 hours on that stretch.

Also See : Talgo high-speed trials for Indian Railways: 10 interior & exterior images that sum up the train for you!
Talgo, the Spanish manufacturer of high-speed trains, has brought its coaches to India, stating that they can attain higher speeds on existing Indian tracks. Suresh Prabhu-led Indian Railways has been conducting extensive trials to check on Talgo’s claims and examine the suitability of these coaches for Indian tracks and needs. Before the Delhi-Mumbai Rajdhani route, Talgo’s coaches were tested on the Mathura to Palwal stretch, where the train had achieved a speed of 180 kmph. This speed is said to be the fastest till date on Indian tracks, beating the likes of Rajdhani, Shatabdi and Gatimaan.

Recently Railway Minister Suresh Prabhu had voiced his aim of making the Indian Railways’ infrastructure so robust, that train travel between two parts of India takes less than 12 hours. He had even appreciated the ongoing Talgo trials and said, “Talgo is very keen to manufacture in India; this will give impetus to PM Modi’s Make In India dream.” “We want to enhance customer experience, safety, bring in speed and augment capacity. The idea is to enhance the average speed of all trains so that everyone benefits. We are dreaming of an India where it doesn’t take more than 12 hours to travel from one part of the country to the other,” he had said at the International Conference on Technology for Ultra High-Speed Rolling Stock.