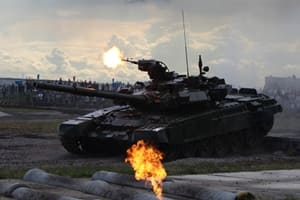 The acquisition of T-90 tanks would not only add a potent weapon in the hands of the Indian Army, but would also send a strong warning to Pakistan. (Image by RIA Novosti)

Giving a much-needed boost to the Indian Army’s attack capabilities, Manohar Parrikar-led Defence Acquisition Council (DAC) has cleared a deal for buying upgraded versions of Russia’s powerful T-90 tanks for Rs 13,448 crore. The acquisition of T-90 tanks would not only add a potent weapon in the hands of the Indian Army, but would also send a strong warning to Pakistan. Reports suggest that an initial approval has been given for the procurement of 464 T-90 tanks under the Modi government’s Make in India initiative. The tanks, once the deal with Russia comes through, will be manufactured at the Ordnance Factory Board.

The Indian Army already has T-90 main battle tanks, which are assembled at the Avadi Heavy Vehicles Factory. However, according to a report in the Sputnik, the upgraded versions will have thermal imaging night vision cameras along with a host of other countermeasures. These will reduce the chances of the tank being hit by the enemy. The current Indian versions of the T-90 tanks are Shtora self-protection system and Catherine thermal images from Thales and Peleng, the report added. Also, the T-90s would help replace the ageing fleet of T-72 tanks.

Brigadier Gurmeet Kanwal (Retd), Distinguished Fellow, Institute for Defence Studies and Analyses (IDSA) feels that the T-90s will be a force multiplier for the Indian Army. “The new T-90s will replace the T-72 fleet of tanks. The upgraded tanks will have night fighting capabilities which are sorely needed. Overall, the tanks will act as a force multiplier when it comes to war in the planes against Pakistan,” he tells FE Online. “There is news that the deal for T-90s will have an enhanced Make in India component. While these tanks are already assembled in India, the buzz that some parts will be made in India is good news. All future defence procurements should definitely have a Make in India component. As far as the T-90 tank’s capability goes, it is one of the best battle tanks in the world. Pakistan has nothing to match it,” he added.

Manoj Joshi, Distinguished Fellow at Observer Research Foundation (ORF) also gives a thumbs up to the government’s decision. “See, any country needs armour for deep penetration into the enemy’s territory, but given Pakistan’s low nuclear threshold that option is out. However, India needs to build up its armour, given that Pakistan is doing so too. In that sense, the acquisition for more T-90s makes sense,” Joshi tells FE Online. He adds, “Also, the T-90s will replace the old T-72s. The upgraded T-90s are also said to have self-protection systems, which means that they can foil anti-tank guided missiles. As far as the Arjun tank goes, it has its use in the Punjab sector, but for the desert, I think we need the T-90s.”

But, how much of a boost will it be for the Make in India campaign, and what about DRDO’s Arjun tank? It is immediately unclear how much of a ‘Make in India’ component would the fresh deal have, and some experts are of the view that the indigenous Arjun tank may end up being ignored. Colonel (retd) KV Kuber believes that the current indigenous component in the T-90 tanks is “shameful”. Kuber, an Independent Consultant on Defence and Aerospace, believes that the government should focus on ramping up production of the Arjun tanks, instead of getting more T-90s from Russia.

“There is no doubt that the T-90 is a wonderful tank and it is very handy in case of mechanised warfare. We have a lot of T-90s in our inventory. But while the T-90 is a world-class tank, and is lighter than the indigenous Arjun, I am not sure whether the Indian Army needs many more of them in number,” he tells FE Online. In his view, the government should look to push the Ordnance Factory to develop more Arjuns. “It will be more cost effective and will give a good push to Make in India. Right now T-90s are assembled in India, but the indigenous component is shameful. Arjun may be a heavier tank, but its on-the-move strike precision is unparalleled,” he says. Kuber also questions the need for the T-90 tanks, given their best use would be in the barren desert. “The T-90 tanks are good for the desert terrain, but even in Rajasthan these days, so much of barren land for the tank to move in is less. So in terms of employability also, the T-90s are not of paramount importance. Instead, one should look to acquire more air power for the Indian Army, such as helicopters. All in all, while I agree that T-90 is a great tank to have, in terms of cost effectiveness versus employablity versus Make in India – in all three equations, I believe that more emphasis should be given on upping the production of Arjun tanks,” he opines.

Ankur Gupta, Vice President A&D at Ernst Young India is of the view that the T-90 tank could have been a great ‘Make in India’ story, but delays have crippled it. “The T90 is the main battle tank of the Indian Army and we have been producing these under license for several years now. If only the order book for this platform would not have been staggered through multiple smaller orders, the economies of scale for its locally developed supply chain would have made it into a ‘really successful’ Make in India story,” he tells FE Online.

There is little doubt that India needs to boost its defence and attack capabilities, given the growing unease with Pakistan and China. A lot of defence deals – be it Rafale, S-400 Triumf, M777, BrahMos – have been aimed at plugging gaping holes in India’s defence preparedness. However, one cannot ignore that there is a major need to push the Indian defence industry and build some indigenous sustenance when it comes to defence equipment. Given the gestation period for setting up any production facility, off-the-shelf purchase of critical defence equipment makes sense, as long as it is balanced with a long-term view for Make in India in defence.