Reiterating India’s historical support for Palestine, India’s External Affairs Minister Sushma Swaraj declared on Tuesday that it will be a central point of its foreign policy. 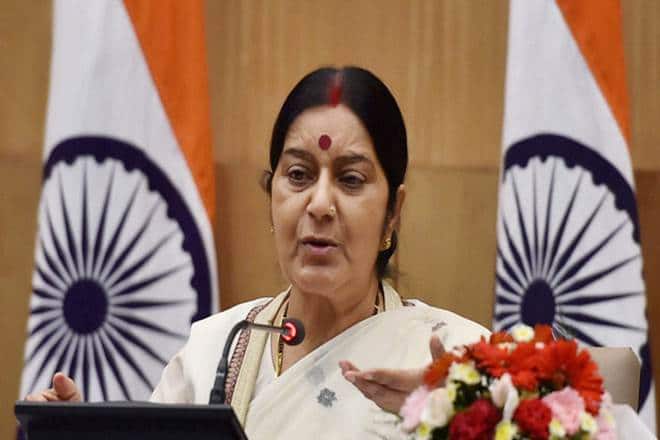 Reiterating India's historical support for Palestine, India's External Affairs Minister Sushma Swaraj declared on Tuesday that it will be a central point of its foreign policy.(Image: IE)

Reiterating India’s historical support for Palestine, India’s External Affairs Minister Sushma Swaraj declared on Tuesday that it will be a central point of its foreign policy. “For independent India support for the Palestinian cause has been a reference point of its foreign policy,” she told the Nonaligned Movement’s Ministerial Committee on Palestine on the sidelines of the high-level General Assembly meeting.

Recalling that the NAM Committee on Palestine was set up during India’s chairmanship of the Movement in 1983, Sushma Swaraj said that New Delhi’s commitment to the Palestinian cause and solidarity with the Palestinian people “can never be undermined”. “I strongly believe that India’s expanding relations in the region with all nations will only strengthen the Palestinian cause,” she said.

Her reassurances to Palestine and and its supporters comes after Prime Minister Narendra Modi’s July visit to Israel during which he stayed away from Palestine. Ties between India and Israel have grown sharply in recent years, especially in the defence field. “I strongly believe that India’s expanding relations in the region with all nations will only strengthen the Palestinian cause,” she said, adding, during Modi’s visit to Israel “we reiterated the need for a just and durable peace in the region”.

Peace in the region will only be possible with “an early negotiated solution between Israel and Palestine based on mutual recognition and security arrangements,” she said. In a rebuttal to criticism by some in India and elsewhere for what they see as a dilution of New Delhi’s engagement with Palestine, she said: “It is a matter of great personal satisfaction for me that over the last two years the tempo of our partnership with the Palestinian people has been significantly stepped up.”

Sushma Swaraj also recalled her visit to Palestine in January last year when she and her Palestinian counterpart Riyad Maliki decided to establish a ministerial-level joint commission to better manage cooperation activities between the two sides. During Palestine President Mahmoud Abbas’s visit to India in May, the two countries signed agreements for cooperation in agriculture, information technology, health and in youth affairs and sports, she said.

“We also took the decision to set up an information technology park in Ramallah that can serve as an information technology training and service providing hub,” she added. Stating that India has been voluntarily contributing to the UN Relief and Works Agency (UNRWA) for several years now, Sushma Swaraj said: “In 2016, we contributed $1.25 million towards its budget, and we are committed to maintaining this support on a multiple-year basis.”