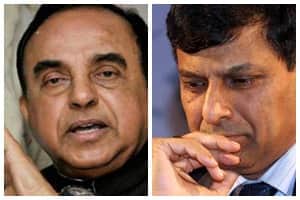 He also asserted that Rajan is "not fully Indian" and is "not appropriate for the country" and alleged that he has "hiked interest rates in the garb of controlling inflation that has damaged the country".

Accusing Rajan of raising interest rate to the detriment of small and medium industries, Swamy said the Governor should have known the “inevitable consequence of rising and high interest rate and his policy was wilful and thus anti-national in intent”.

Swamy said that six allegations levelled by him against RBI Governor were “prima facie true” and require termination of Rajan’s services “immediately” in the “national interest”.

In his second letter to Modi within a fortnight, Swamy alleged that despite holding a sensitive and very high government post, Rajan has been making mandatory trips to the US to renew his Green Card.

RBI Governor’s post, Swamy added, “is very high in the Warrant of Precedence and requires a patriotic and unconditional commitment to our nation”.
Rajan, he further alleged, is a member of US dominated Group of 30 which is engaged in defending America’s dominant position in the global economy.