On Twitter: I’m Paul Rosolie and I’m about to be the first person to be eaten alive by an anaconda 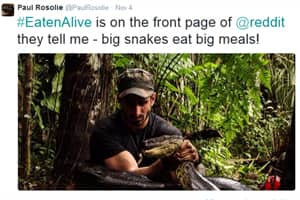 Paul Rosolie: You'll have to watch #EatenAlive to find out how it goes down

A young American naturalist, filmmaker and adventurer in the Amazon has set off an Internet stir after he claimed he offered himself for dinner to a giant snake for a TV show.

“I’m Paul Rosolie and I’m about to be the first person to be eaten alive by an anaconda,” he said yesterday in a 30-second video on Twitter promoting a new show, “Eaten Alive,” to be telecast on the Discovery Channel on December 7.

A longer teaser posted by the network on YouTube shows Rosolie donning “a custom-built snake-proof suit” to enter the belly of the fearsome reptilian beast head-first.

“It’s a tease and a promo for now,” a Discovery Channel spokesman told AFP yesterday, adding that further details about the show — to be aired worldwide by the reality TV cable channel — would be released “soonish.”

On his Twitter feed, Rosolie told his followers: “If u know me – I would never hurt a living thing. But you’ll have to watch #EatenAlive to find out how it goes down!”

Social media and tabloid websites jumped on the story, but animal rights group PETA, fearing for the welfare of the snake, demanded that Discovery pull the show.

“Whatever the filmmaker has planned, the snake will likely pay the ultimate price, as animals usually do when they’re used for entertainment,” it said.

Green anacondas, native to tropical South America, are among the biggest snakes in the world. The one seen in the “Eaten Alive” teaser required at least seven men to hold it.

Earlier this year, Rosolie — who divides his time between New York, India and Peru — published a book about his adventures, titled: “Mother of God: An Extraordinary Journey into the Uncharted Tributaries of the Western Amazon.”

In 2013 he won a short-film award at the UN Forum on Forests for his documentary “An Unseen World,” according to a biographical blurb on the website of publisher Harper Collins.
But PETA dismissed him as “a pseudo ‘wildlife expert’.”

“Making this snake use up energy by swallowing this fool and then possibly regurgitating him would have left the poor animal exhausted and deprived of the energy that he or she needs,” said its deputy general counsel Delcianna Winders.