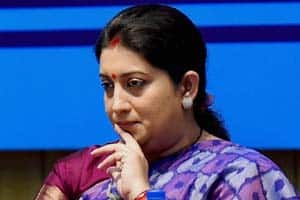 JD(U) leader Sharad Yadav, who is already at the centre of a raging controversy over his remarks on women, was today made to regret a statement he had purportedly made on HRD Minister Smriti Irani during a spat with her in the Rajya Sabha on Monday.

“I regret (the controversy). The media reports (on his statement), that was not what I meant” he said bringing to an end a row triggered by his comments  on Irani.

On Monday when the House was discussing his Friday remarks on the colour of women from South India, the HRD Minister had then beseeched him not to speak about such issues.

“Who are you.  Being a minister, you just take your seat and listen to me,” he had then shot back.

Leader of the House and Finance Minister Arun Jaitley today raked up the issue referring to media reports attributed to “senior colleague” Sharad Yadav about one of the lady members of the House, who is also the HRD Minister, that “I know what kind of a person you are”.

“Even though the statement was not allowed to be recorded in the proceedings, newspapers have carried it which has created a very improper impression.

“The relationship of members of the House is one of respect for each other. I appeal to Sharadji to clarify and put an end to the matter,” he said.

Yadav immediately got up to disarm the House with his remarks that he respected two women ministers of the government–Nirmala Sitaraman and Irani.

“I consider Sitharaman as the best minister and respect her for her competence.  In the case of Irani, in fact, I was the one to first defend her when there was a controversy over her degree adding he himself was “an engineer of political Science but had never studied it.”

“I regret.  The media reports… that was not what I meant,” he said bringing the matter to an end.

A major controversy had broken out late last week after Yadav had commented on the complexion of women and body of south Indian women.

When the issue was raised in the House by Irani, DMK member Kanimozhi and some others on Monday, Yadav had remained defiant and unapologetic.  During the impromptu debate, he had reacted sharply against the HRD Minister saying “who are you.”