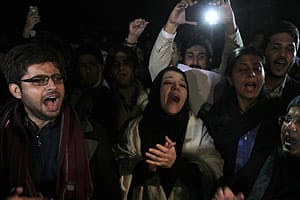 The Uddhav Thackeray-led Shiv Sena today said that Pakistan should first take to task JuD leader and Mumbai attacks mastermind Hafiz Saeed before vowing to eliminate terrorists from its soil in view of the ghastly massacre of school children in Peshawar.

“This country (Pakistan) is kind of terrorist manufacturing factory. That is why we find it amusing that you have lifted the ban on the death penalty for terrorists. Terrorists like Hafiz Saeed are spewing venom against us (India) in the aftermath of the children’s massacre in Peshawar,” an editorial in Sena mouthpiece ‘Saamana’ said.

“He (Saeed) says Prime Minister Modi is responsible for the massacre and that he will take revenge against India for it. Nawaz Sharif should first ensure that this man is brought under control,” it said.

The world will not trust Pakistan’s resolve to fight terror unless terrorists like Saeed are “eliminated from the root,” the Sena said.

Saeed is on India’s most wanted list for masterminding the Mumbai attacks that killed 166 people during a 60-hour siege in November 2008.

Notably, the anti-terrorism court in Pakistan yesterday gave bail to LeT operations commander Zakiur Rehman Lakhvi, a key planner of the 2008 Mumbai attacks, despite evidence against him in the case which was nearing its end.

“We are deeply saddened by the massacre of hundreds of children in their school. The soil of Pakistan has become dangerous for every country and hence all nations need to come together to fight terror originating from there. Their (Pakistan’s) government alone will not be able to reign in the terror,” the Sena said.